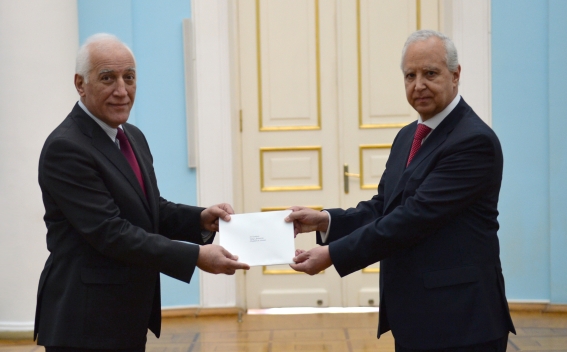 Congratulating the Ambassador, President Khachaturyan wished him fruitful work throughout his diplomatic mission.

Touching upon the prospects of bilateral cooperation, President Khachaturyan highlighted that even though we trace some activation in Armenian-Chilean trade-economic ties lately, there is a great potential for developing these ties, and it will take joint efforts to achieve it. The President attached importance to intergovernmental and inter-ministerial contacts between Armenia and Chile from the viewpoint of exchange of best practice in the fields of economy, high technologies, mining and winemaking.

The newly appointed Ambassador expressed his gratitude for the reception and noted that he is willing to put efforts into the multi-layered Armenian-Chilean cooperation, and the events dedicated to the 30th anniversary of the establishment of diplomatic relations between Armenia and Chile next year are on his agenda. According to the Ambassador, it is planned to have political and interdepartmental consultations with the Armenian side within the framework of these events, to clarify the main directions of further cooperation.

During the meeting, the President presented to the Ambassador the regional realities and Armenia’s approach regarding the relations with the neighboring countries. President Khachaturyan highlighted that Armenia adheres to its position of normalizing relations with Turkey with no preconditions and achieving peace with Azerbaijan as soon as possible.

Emphasizing the importance of the establishment of peace in the region, Ambassador Escobar highlighted that Chile surely advocates the principle of solving conflicts without resort to force and it will take possible steps in the international arena to contribute to the peace process.

During the meeting, the sides exchanged ideas on the development agendas of bilateral relations and the possibilities of mutual high-level visits.