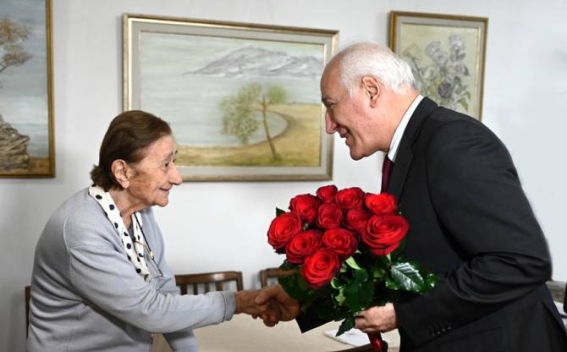 President Vahagn Khachaturyan, alongside Mayor of Yerevan Hrachya Sargsyan, paid a visit the family of painter Hagop Hagopian, talked to his widow Mari Hagopian and his daughter Nora Hagopian.

Over a cup of tea, the family members of the prominent painter presented to the President the plans of events dedicated to Hagop Hagopian’s 100th birth anniversary.

The President noted that the cultural events dedicated to the 100th birth anniversary of the distinguished painter should be organized with the utmost support of the government and the direct assistance of the Ministry of Education, Science, Culture and Sports.

Mary and Nora Hagopian discussed with the President the matter of opening an exhibition hall-museum for the permanent display of Hagop Hagopian’s works, which will be momentous from the viewpoint of preservation and public access to the artist's works.

In his speech, President Khachaturyan put a special emphasis on the necessity to open such a museum. Mayor of Yerevan Hrachya Sargsyan in his turn noted that several options are under discussion and the decision will be made with the direct participation of the artist's family.

The President expressed readiness to support and keep close attention to the planning of events dedicated to the centenary and memory of the famous artist as much as possible.