At the Australian Ministry of Foreign Affairs Mr. Arman Tatoyan presented the latest facts of Azerbaijani criminal invasions in Armenia and evidence of war crimes 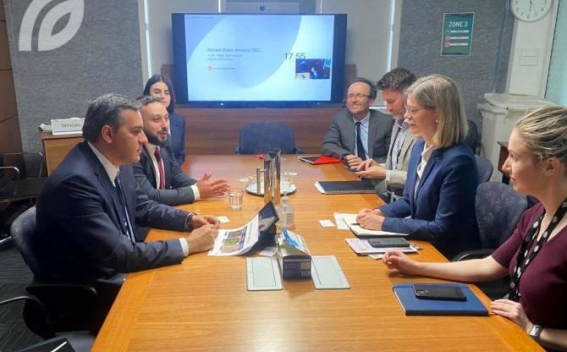 To present the Azerbaijani war crimes in the Armenian sovereign territory and Artsakh, the Director of the Law and Justice “Tatoyan” foundation held consultations at the Ministry of Foreign Affairs of Australia.
The Vice-Chairman of the Armenian National Committee of Australia Khajaque Kortian and the Executive Director Michael Kolokossian also participated in the meeting.
Arman Tatoyan presented the foundation's facts related to the Azerbaijani invasions of the sovereign territory of Armenia, starting from 21 May 2021 to 14 September 2022, with documentation on maps and also spoke about the right of Artsakh Armenians to self-determination.
He showed the detailed consequences of the latest Azerbaijani invasions in Jermuk, as well as Syunik and Gegharkunik provinces, stressing that the facts illustrate that Azerbaijan is strengthening of its unlawful armed locations in the occupied territories of Armenia, as well as territories that are in the immediate vicinity of villages and on the roads, even preparing for winter by unlawfully building military roads, positions, buildings and bunkers.
The Jermuk Hydro Power Plant (HPP), the “Tatev” HPP, the tailing pond of Geghanush in Kapan, “Syunik” Airport and other objects of strategic nature are under the Azerbaijani armed forces’ direct target.
The Director of the foundation informed that the Azerbaijani shootings near the border villages of Armenia became daily. They terrorize people and have made life in those villages impossible.
Arman Tatoyan presented the facts of civilian community destructions, torture of military servicemen, mutilation of bodies, and execution of Armenian Prisoners of War (PoW). Moreover, Armenian PoWs continue to be unlawfully kept in Azerbaijan and used for political and military bargaining purposes.
A separate reference was made to the brutalities of the Azerbaijani special forces "YAŞMA" against female soldiers killed during the attacks launched by the Azerbaijani side on September 13-14, 2022.
Arman Tatoyan also showed evidence of the Armenophobic and fascist policies of Azerbaijan. This policy of patronage of impunity is not only not diminishing, it has deepened as a tool to maintain political power. It covers all areas, from all levels of education to culture, and has both religious and ethnic bases.
He emphasized that under these conditions, Azerbaijan misleads the international community, it actually has no peace intentions. It is a primary and urgent issue that the Azerbaijani armed locations must be removed not only from the Armenian territories invaded by Azerbaijan, but also from the villages of Armenia and from the roads between the communities: a demilitarized security zone must be created to restore people's normal lives, their rights and security.
Հայերեն На русском