At Extraordinary Sitting Parliament Debates RA NA Statement Related to the Statement of Parliament of Azerbaijan of November 8, 2022 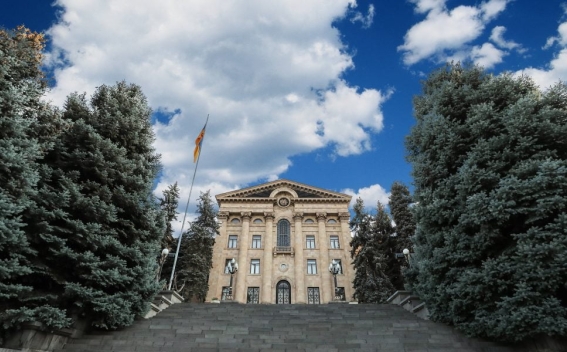 On November 8, the parliament of Azerbaijan adopted a stamen on 44-day war of 2020, where the essence of the Karabakh conflict and the causes of its origin were falsified. In our point of view, wrong evaluations were made to the causes of the 44-day war. Unacceptable demands with no legal bases were presented to Armenia, and bellicose rhetoric was used. The following formulations, as ‘Eastern Zangezur’ was used. In their point of view, there exists, so called ‘Western Zangezur’ towards which they have expansionist aspirations, and again they spoke about the corridor. On the basis of the so-called ‘Peace Agreement’ the idea that the Karabakh conflict is already settled, Karabakh is part of Azerbaijan, and they will speak with the Karabakh people within the framework of their inner legislation. The Parliament of Armenia is obliged to give an adequate answer to the statement adopted by parliament of Azerbaijan, because the silence in the best case is a sign of fear, and in the worst case is a sign of consent. The deputy of the RA NA Armenia Faction Andranik Tevanyan said about this during the extraordinary sitting of the National Assembly convened at the deputies’ initiative on December 2.

The NA draft statement The Statement of the RA National Assembly Related to the Statement of Parliament of Azerbaijan of November 8, 2022 is on the agenda.

According to Andranik Tevanyan, this is a convenient occasion to show the society, the strategic counterparts, the international community that Armenia has distinct red lines connected with the security system, has commitment to the protection of the right to self-determination of Artsakh and the security of Artsakh, and to present those approaches to the international community.

The Chair of the NA Standing Committee on Foreign Relations Eduard Aghajanyan presented the endorsement of the Committee. He informed that though a mutual agreement was reached on the numerous paragraphs with the Armenia Faction, nevertheless, there were issues of principle, on which agreement was not reached.

According to the Committee Chair, the formulations that are proposed in the draft presented by the Armenia Faction, will not only promote the formation of the international consolidation on Armenia, but they will cause possible risks for pushing out of the way and deviating Armenia.

“Accordingly, we believe that while taking a step there should be clear assessment and analysis of the consequences, goals of the given action, as a result of it, outcomes and possible risks to be obtained. Our analysis shows that the proposing terminology causes more risks than promotes the advancement of the peace agenda of the Republic of Armenia, and we, as a responsible power of the Republic of Armenia, cannot adopt a statement which contains such risks,” Eduard Aghajanyan stressed.