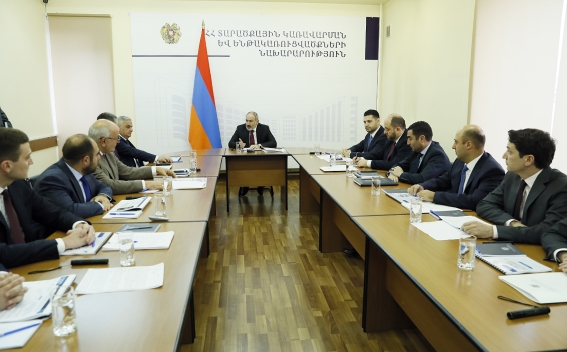 Minister of Territorial Administration and Infrastructure Gnel Sanosyan, deputy ministers, head of the Migration Service presented the programs and measures implemented by the ministry according to the sectoral directions.

Administrative territorial reforms continued in the field of territorial administration and local self-government. in the framework of the community enlargment process, 71 communities were formed instead of 915 communities, currently discussions are underway on the process of decentralization of powers. The introduction of electronic management systems in the form of citizen service offices (CSOs) in communities continued. in the current year, CSOs were created in 7 communities, in total, CSOs have been introduced in 75 settlements of 56 communities. The officials in charge assured that about 40 state services can be technically implemented through the mentioned system. It was noted that the electronic system of real estate tax collection attached to communities has been in operation for 2 years, and high indicators have been recorded. In 2022, 800,000 subscribers paid their municipal taxes online. With the support of the government and international partners, with a funding of around 21.9 million US dollars, the process of infrastructural development and logistical support of communities continued.

In the field of waste management, within the framework of the "Kotayk and Gegharkunik Solid Waste Management" project, the construction works of the Hrazdan sanitary landfill and the transfer stations of Martuni and Akunk are in the final stage, the tender for the purchase of garbage cans is announced for next year. A program proposal for the implementation of an integrated solid waste system in the other 8 regions has been developed, which is being discussed with international experts, and the design tender is expected to be announced at the beginning of the year.

In 2018-2022, 1897 subsidy programs were implemented in the communities with a total cost of around 90 billion AMD. The leading sectors are asphalt paving, lighting, renovation of public buildings, improvement of water infrastructure, kindergartens, etc. The preliminary applications for subsidy programs in 2023 have already been submitted. 459 projects with a total value of more than 112 billion AMD were presented. The Ministry of Territorial Administration and Infrastructure carried out monitoring of 481 complete projects which are under warranty, 80 percent of identified defects have been eliminated, the process continues.

Road network rehabilitation and development projects continued through modernization, quality and safety improvements. It was noted that the target of 500 km of road construction planned for 2022 has been overperformed. As of now, 530 km of asphalt paving has been carried out. The major part was the overhaul, medium repair works were also performed. The works being carried out in the Syunik Province, within the scope of which new roads are being built, was emphasized. It was reported about the progress of the North-South investment program, the Road Safety Improvement Program, and it was noted that a number of strategic projects have been completed. Current reforms and initiatives, steps towards road management and maintenance were presented.

The Prime Minister was reported about installation of gas cylinder equipment on vehicles and regular certification process in 2022; it was noted that as of November of this year, 66 licenses were issued, 152,000 gas cylinders were calibrated, about 5,000 gas cylinders were rejected during certification, of which 4,600 were outdated and potentially explosive. The process of issuing licenses and permits in other areas also continued, including 19 licenses for technical inspection stations. Competitions for the selection of operators in regions were organized for the introduction of the unified route network, in some regions the system is already being modernized, while in others the works are still in progress. The electronic system of road toll collection and the work being carried out towards its introduction, the projects implemented in the field of railway transport were presented.

In the field of energy, the process of extending the operation period and ensuring safety of the second power unit of the Armenian NPP continued, as a result of which the license period was extended until 2031. The works of re-equipment of energy infrastructures, as well as the construction of new substations have been carried out, the projects of the construction of Iran-Armenia and Armenia-Georgia power transmission lines are in progress. The state support program for energy-efficient renovation of apartments and individual residential houses has been launched, the number of beneficiaries of which exceeds 400. The Natoinal Program for Renewable Energy and Energy Saving for 2022-2030 was developed.

In the field of soil, the improvement of the legislative framework continued in 2022. More than 50 subsoil use rights were granted, and the positive dynamics of the companies’ proper fulfillment of their obligations was recorded as a result of administrative control. The development strategy of the mining sector is being developed.

In the field of migration, digitization of services and institutional reforms were carried out. The unified electronic platform for attracting foreign workers - workpermit.am, electronic systems for readmission, refugee and asylum seeker claim management were introduced. The housing provision program for families who forcefully emigrated from Azerbaijan in 1988-1992 is coming to end, which was implemented in Yerevan for the first time since 2019.

The Prime Minister emphasized the priority of reforms in territorial administration and infrastructure and inquired of a number of programs and works. Details were presented to the Head of the Government in this regard. There was an exchange of ideas about the measures implemented and initiated according to sectors, and the further actions were discussed.

The Prime Minister emphasized the quality assurance of subsidy programs, targeted implementation of community enlargement, addressability of electronic management systems, correct organization of the garbage collection process, asphalting of rural roads, introduction of modern road maintenance and weighing systems, tightening of control over gas stations. A number of instructions were given to those in charge. Nikol Pashinyan noted the need for proper public awareness and active public communication regarding sectoral reforms.