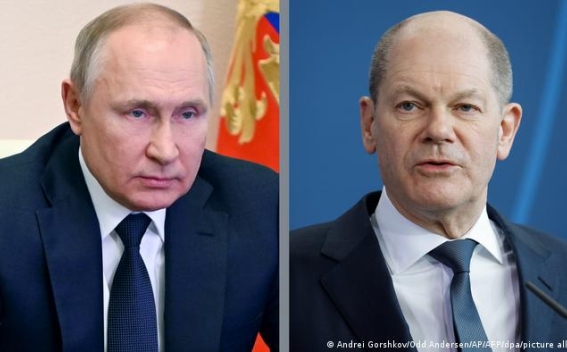 Flooding Ukraine with weapons is a destructive policy, Russian President Vladimir Putin pointed out in a phone call with German Chancellor Olaf Scholz on Friday, according to the Kremlin press service, TASS reports.

"Attention was drawn to the destructive policy that is being pursued by Western countries, including Germany, who are flooding the Kiev regime with weapons and training Ukrainian troops," the Kremlin press service said in a statement.

According to the Kremlin, "as a result of all this, as well as of the comprehensive financial support for Ukraine, Kiev keeps outright rejecting the very idea of talks." "In addition, it encourages radical Ukrainian nationalists to commit more heinous crimes against civilians," the statement added.

"The Russian president called on Germany to reconsider its approach with regard to Ukraine developments," the statement stressed.

The leaders of Russia and Germany discussed various aspects of the situation around Ukraine. "Putin once again explained the details of Russia’s approach to conducting its special military operation," the Kremlin press service noted.

The conversation was initiated by Germany. Putin and Scholz last held a phone call on September 13.