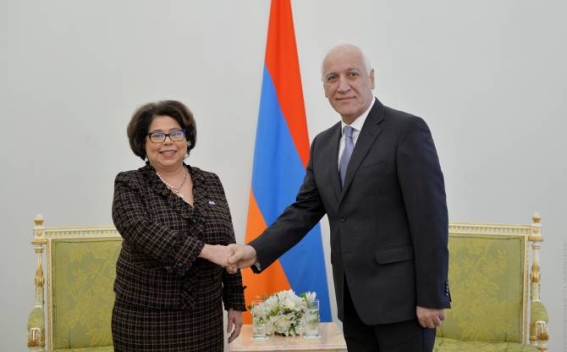 President Khachaturyan congratulated the Ambassador on her appointment, wishing her fruitful work and success during her diplomatic service.

“I hope that the appointment of the Ambassador of Nicaragua to Armenia will contribute to the development of cooperation between the two countries," noted the President.

During the meeting, the sides discussed the possible directions of cooperation between Armenia and Nicaragua in the fields of education, culture and economy. The President attached importance to the activation of the inter-ministerial and inter-parliamentary contacts.

The President presented to the Ambassador the regional realities and Armenia’s approach to the relations with the neighboring countries. President Khachaturyan emphasized that Armenia adheres to its position of achieving peace with Azerbaijan as soon as possible.

Attaching importance to the cooperation of the two countries within the framework of the UN and on the international platforms, the Ambassador noted that Nicaragua unconditionally advocates peace and will make efforts to establish peace in the South Caucasus within its capabilities.

During the meeting, the sides exchanged ideas on the signing ceremony for the Memorandum of Cooperation and Understanding and mutual high-level visits between Armenia and Nicaragua.