We want the Lachin Corridor to have additional international guarantees: Arayik Harutyunyan 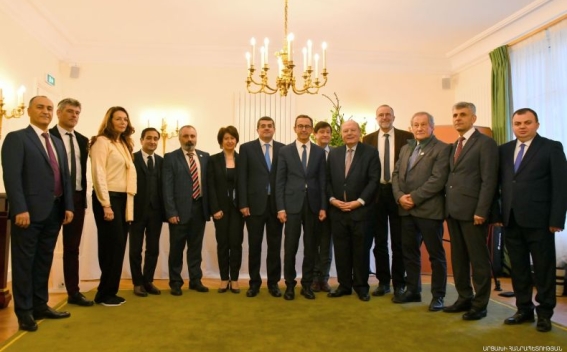 The meeting addressed issues related to the Azerbaijani-Karabakh conflict settlement, Artsakh-France relations and regional processes. Special attention was paid to the development of interparliamentary ties.

Speaking of Artsakh's interest in the development of relations with France, particularly its legislative body, the President highly appreciated the consistent efforts of the Senate and the National Assembly aimed at settlement of the Azerbaijani-Karabakh conflict. "The resolutions adopted by the French Senate and the National Assembly regarding Artsakh are a good basis for a comprehensive and permanent settlement of the conflict between Artsakh and Azerbaijan. Respecting the right of the people of Artsakh to self-determination and recognizing the results of the realization of that right is the only way to settle the conflict, which guarantees the proper level of rights and security of the people of Artsakh," Arayik Harutyunyan highlighted.

Expressing gratitude to the parliamentarians for the adoption of the resolutions, the Head of the State noted that these decisions are a political message and fully correspond to the political traditions of France based on the principles of freedom, equality and fraternity. According to the President, currently the most important task is to make these political messages a reality, to give them real power. In that context, the President expressed hope that the works towards the recognition of the Republic of Artsakh will be completed by the executive power of France, which will allow preventing a new genocide of Armenians in their homeland.

The Head of the State voiced hope that the resolutions adopted by both Houses of the French Parliament that call for the recognition of the Republic of Artsakh will serve as an example for other countries of the world.

Arayik Harutyunyan also presented the post-war situation in Artsakh to the French parliamentarians. In particular, he noted that Artsakh is connected to Armenia and the external world by a single road, the 5 km wide Lachin Corridor. "Azerbaijan wants to cut that only and last link with the world, strangling Artsakh. We want the Lachin Corridor to have additional international guarantees to ensure uninterrupted connection of Artsakh with Armenia and the external world," the President noted.

According to the Head of the State, Artsakh anticipates also the active involvement of France in the implementation of humanitarian programs, the return of captivated Armenians and the preservation of endangered Armenian spiritual and cultural heritage in the territories occupied by Azerbaijan.

Ambassador Extraordinary and Plenipotentiary of the Republic of Armenia to France Hasmik Tolmajian and ARF bureau member, co-chairman of the Coordinating Council of Armenian Organizations of France (CCAF) Mourad Papazian were also present at the meetings.

Other meetings are also planned during the visit.