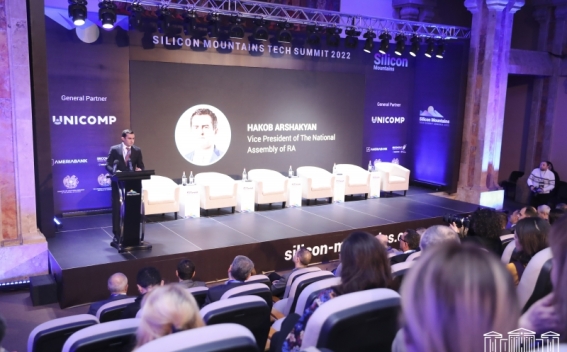 In his welcoming speech the RA NA Vice President underlined that the high technological sphere in Armenia continues confidently lead the economy, being the fastest growing and developing branch. “The evidence is that in case of the regional crisis, the inflow of the talent mainly and in the most important directions took place to Armenia,” the NA Vice President documented, adding that our state could solve the problem laid before it, to be a technological centre, as a high technological country, be represented on the international arenas, not completely, but in the regional format.

According to Hakob Arshakyan, numerous countries in the region are in the race with their tax systems, infrastructural projects and tactics of negotiating with big companies in different directions. “This is necessary to accept as a challenge and continue to work in this direction and make efforts,” he said and underscored that though the sphere of the high technological industry is leading with the rates of growth, nevertheless the toolkit use both in the society and in business is not at a high level.

The NA Deputy Speaker touched upon the importance of the connection of the high technology industry, science, education and economy, noting: “It is necessary to bring the science, education, industry and economy connection to a fundamental new level, and this should be our conversation on the future of providing scientific-technological new flight of Armenia.” To his conviction, the science, economy, industry and education should be consonant with their programmes and serve to the same goals.

Concluding his speech, the NA Vice President highlighted the discussions in such format and wished the participants effective work.

During the Summit, the RA Minister of High-Tech Industry Robert Khachatryan, the RA Minister of Economy Vahan Kerobyan, the RA Governor of the Central Bank Martin Galstyan and the Executive Director at the Union of Employers of Information and Communication Technologies Armenia Eduard Musayelyan also gave speeches.

Afterwards, the prospects of the use of the smart solutions and the economy digitalization were referred to in the format of panel discussions. The attendees also watched a video clip telling also about the previous three events.