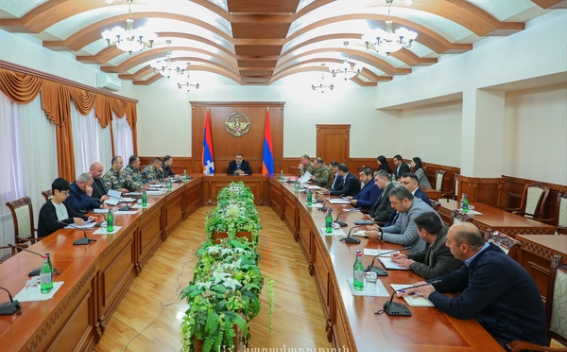 State Minister of the Artsakh Republic, head of civil defence Ruben Vardanyan today called a consultation with the participation of heads and officials of departments responsible for civil defence.
During the consultation, the civil defence plan of the Republic of Artsakh was presented and discussed, proposals were presented regarding the document.
It was considered important to develop a realistic and viable document in line with the current challenges. State Minister Ruben Vardanyan considered the organization of civil defence at a proper level to be of primary importance from the viewpoint of the safety of the population, emphasizing that it should also be one of the priority tasks of the Government's activity. He considered important the coordinated work of the departments involved in civil defence, the implementation of periodic trainings, as well as the organization of educational events among the population. During the consultation, it was decided to create a working group to discuss issues related to the field of civil defence.