The delegation headed by President of the Artsakh Republic visited Lyon: A new cooperation document signed 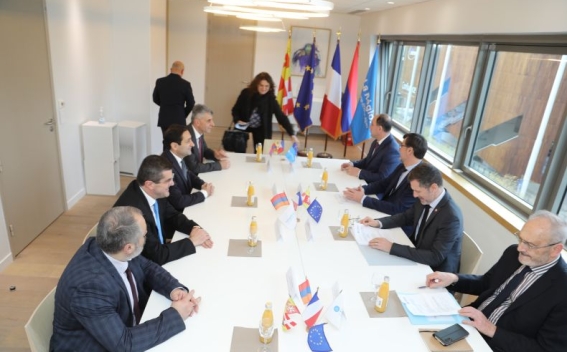 In his remarks, President Harutyunyan noted that the development of the bilateral relations with various administrative regions of France was among the priorities of foreign political agenda of Artsakh, and highlighted the need for further expansion of relationship with Auvergne-Rhône-Alpes Region that have become traditional.

During the meeting, the parties signed a joint declaration, in which a belief is conveyed that the conflict between Azerbaijan, Armenia and Artsakh will be resolved only through peaceful means, provided that human rights and international agreements are respected. It also calls on France, the European Union and the international community to remain consolidated in order to protect the rights and territorial integrity of Armenia and Artsakh.

The declaration states that despite the tripartite statement signed on November 9, 2020, attacks and bombings against Armenia and Artsakh are ongoing, which proves that Azerbaijan is never going to respect the provisions of the declaration nor the commitments it made during the subsequent negotiations.

"By attacking Armenia following Artsakh, bombing and particularly targeting the civilian population and infrastructure, Azerbaijan wants to create an extraterritorial road (corridor) by force connecting its territory to Nakhichevan, cutting off the territory of Artsakh and the Syunik province," the declaration emphasizes.

The Auvergne-Rhône-Alpes region reaffirmed its commitment to the principles and ideas of freedom, democracy and equality and considered the attacks along the borders and the bombing of the civilian population intolerable, through which Azerbaijan aims to force Armenia to make concessions on Artsakh and accept Azerbaijani sovereignty over Artsakh.

During the visit, the President also met with the Mayor of Lyon Grégory Doucet.

Issues related to further development of relations with the city of Lyon were on the discussion agenda. The Mayor of Lyon has assured that the work on the implementation of humanitarian programs in Artsakh will be of a continuous nature.