Davutoglu: It Is Nobody’s Business That Turkey Sends Ammunition to Syria 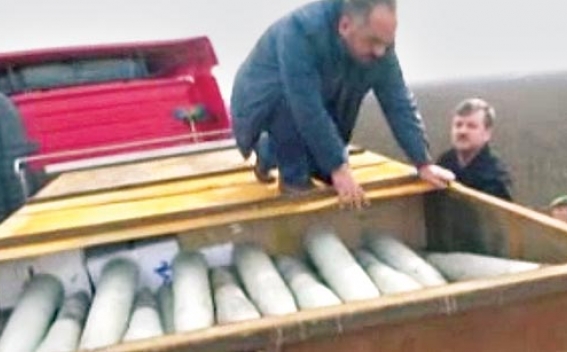 The other day the photos and the videos disseminated by the Cumhuriyet , that proved that trucks of Turkey's National Intelligence Organization contained ammunition, caused an outcry in the Turkish media.

On the occasion the prime minister of Turkey Ahmet Davutoglu made a comment noting that “it was nobody’s business”, what the trucks were transferring.

No doubt the comment was typical to the style of the Turkish prime minister: whose business can Syrian Crisis be, the victims of which are no longer counted by the UN? Whose business can the fate of millions of refuges be, who in several mounths lost everything – homeland, shelter, property… Whose business can the fact be that the “Islamic State,” who expands and gets prosperous as a result of Syrian crisis, “wipes” everyone, who do not share the same religion and belifs, and even gets rid of their cultural heritage.

However other opinions are also heard in Turkey. Turkish lawyers have already declared that the delivery of weapons to the Islamists is against both Turkish Constitution and international norms. Consequently, official  Ankara will have to give explanation to the international court for such kind a behavior.

As Today’s Zaman reports, Zekeriya Öz, the former İstanbul deputy chief public prosecutor, who was fired after 2013 December corruption scandal, declared that the comments of Davutoglu make it obvious that the prime minister of the country had not enough knowledge of the international law and could not imagine that the country could be prosecuted in the international court.

All in all it is not serious to deliver weapons to the extremists, who turn the neighboring country into ruin, and declare that it was nobody’s business.  However, it seems that the issue will soon become the case of the international institutions responsible for the security of the international community.

By the way, against the chief editor of Cumhuriyet  Istambul Prosecutor's Office made an appeal and started an investigation.

It is to be remained that on Friday the magazine published sensational photos and video shot in January, 2014 in Adana, where the investigation of the trucks belonging to the Turkey's National Intelligence Organization by the Turkish gendarmes was pictured. In the photos one can clearly see that the trucks were carrying ammunition and not an humanitarian aid, as it was declared. Here we speak of 1000 artillery shell, 50 rounds of ammunition, 1,000 mortar shell and of six steel boxes .

On Saturday, during the rally in Ankara Davutoglu confessed that the trucks were carrying ammunition adding that it was “assistance” to ethnic Turkmens in Syria.