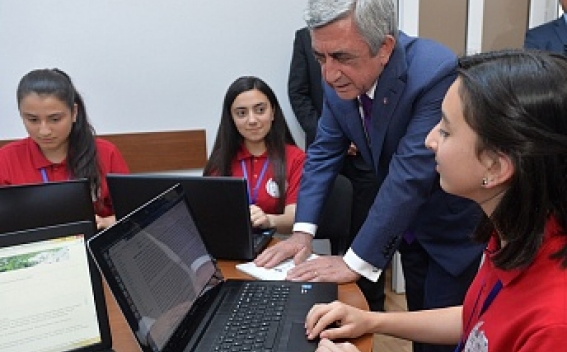 On June 19, the RA President Serzh Sargsyan attended the opening of the office of Wikimedia Armenia scientific-educational NGO on 2 Arshakunyats Street in Yerevan, the press service of the RA President informs.

At the conference hall of the office, Serzh Sargsyan took part in a discussion of issues pertaining to the development of wiki-based projects in Armenia which was also joined by RA Education and Science Minister Armen Ashotyan, RA Culture Minister Hasmik Poghosyan, the Director of the Intellectual Renaissance Foundation, Hakob Hakobyan, its founder Artur Janibekyan, the President of Wikimedia Hayastan NGO Susanna Mkrtchyan, the Chair of the WMF Board of Trustees, Jan-Bart de Vreede, the Head of WMF Grants and Global South Partnerships, Asaf Bartov, the Manager of Wikipedia Education Program, Anna Koval, GLAM-Wiki Coordinator for Europeana Liam Wyatt, the Director of the Intellectual Veratsnund Foundation Marina Sultanyan and project coordinator Armen Martirosyan.

As part of the opening ceremony of the Wikimedia Armenia Office, the participants watched a video on the results of cooperation between the Intellectual Renaissance Foundation and Wikimedia Armenia scientific-educational NGO.

Afterwards, the Armenian President visited the National Branch of Mir Intergovernmental TV & Radio Company. According to the governmental decree of June 18 2015, the branch has been allocated 60 million drams to reequip its earth satellite station in Yerevan.

During the tour, Serzh Sargsyan familiarized himself with the company’s technical capabilities, the re-equipment status and the upcoming works, as well as talked to some of the branch employees. The president was introduced to the production of the National Branch of Mir Intergovernmental TV & Radio Company, its volumes, the programs made by the creative team, which introduce Armenia to the Mir audience of about 162 million people.