The Complexity of Peace Processes: the Cases of Northern Ireland and Scotland 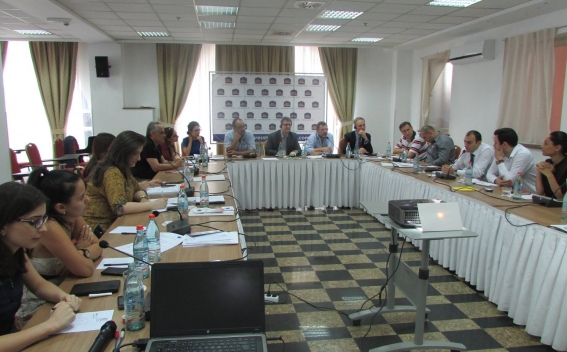 From September 25-28 a workshop on conflict settlement for state officials was held in Yerevan by the NGO "European Integration" together with CMI.

The workshop was attended by representatives of the RA Foreign Ministry, Ministry of Defense, National Assembly, Administration of the RA President, Ministry for International Economic Integration and Reform, and Police.

During the 4 days of the project the conflicts of Scotland and Northern Ireland, their settlement processes, the complexity and uniqueness of peace processes have been discussed. The workshop was also attended by experts, participants of negotiation processes, state officials invited from Great Britain (particularly from Scotland, Northern Ireland) and Switzerland.

During the workshop the invited guests presented the cases of Scotland and Northern Ireland, paying special attention to the peace processes and their peculiarities, as well as presenting the steps and actions of the mediators and the conflicting sides, etc. Various questions on the role of different layers of the society in the peace process, as well as the role of civil society were raised. As a separate topic  the peace process, the position of the sides and the need to take into consideration the interests of the sides, the technique of negotiations and other important components were discussed.

In the framework of the project round-table discussion with the participation of Armenian experts on discussing the Northern Ireland and Scotland cases was organized.

At the end of the workshop the participants stressed the importance of the project, the fact that they were able to exchange their experience with their European counterparts, as well as the importance of discussing and analyzing different components of peace processes of other conflicts. In case of the continuation of the project various suggestions on examining other conflicts have been made by the participants.