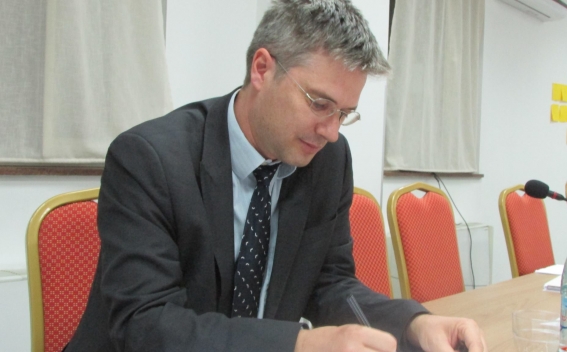 “Armedia” IAA presents an exclusive interview with a senior researcher and head of the Mediation Support Team at the Center for Security Studies (CSS) in Zurich, Switzerland Dr. Simon Mason. The interview was taken in the framework of the workshop "The Complexity of Peace Processes: Lessons from Northern Ireland and Scotland Cases" held in Yerevan on September 25-28*.

-   I would say people were very interested, motivated and rich experienced. This is very nice, because it is a mutual learning, it is not teaching. Many practitioners in these types of workshops have extreme amount of experience and some of the concepts and ideas is more a way of understanding of what they are really doing and in that sense it is a pleasure to work with people so active in their field.

-   What do you think, what are the necessary conditions for the conflicting parties to start negotiations?

It  is also important that there is a regional and international consensus to let the negotiation process happen. It does not necessarily mean that the regional and international actors have to support it actively, but at least they should not block it. So there is a need of this minimal consensus and in the case of, for example,  Sudan that ended up with comprehensive peace process, there was this minimal consensus to let the process happen. And I think this is one of the conditions for successful negotiations between parties.

-   What are the necessary principles and approaches for constructive negotiations that the conflicting parties should follow?

-   One of the key questions is whether the parties in the negotiation process have a common goal. So party A has a goal, party B has a goal and if there is a third party - a mediator, it has a goal. Here the question is – is there a common minimal goal, because if you do not have a common goal, it is extremely hard to find orientation for the negotiation process. If you do have a common goal, the question is then – what the issues are you have to address in negotiations in order to reach your common goal. This is one point. The second point to always think in the negotiation is the process and content. They are both very important. They are linked, but you can also look at them separately. And the key point is that if you want to reach an agreement, you have to have a certain structure and system of a process in order to get and deal with your content. You can’t jump into negotiation and deal with all the content you want to go. You have to look at various issues, agenda, the venue, discussed themes and the sequencing. All this process questions are very important and fundamental, if you want to reach your goal.

There is one specific idea in negotiation, which comes from this book “Getting to Yes.” The book says there is difference between positions – what the parties want, what they state they want - and the interests, which are the concerns, the goals below the position. And the thinking is that if you stick to positions you get blocked, you have to first go below the positions and look at the interests, the concerns of the parties and if you identify that you can find the possible agreement - a point, where the interests of both sides can work on. This is the first step, before looking at options and finding an agreement or a solution.

-   What work should be carried out with the civil societies of the conflicting parties so as they  can have their contribution in the negotiation process or in the resolution of conflicts in general?

-   It depends, of course, very much on which conflict, which cases you are looking at, but the idea is that the people who are affected by the conflict and who are driving the conflict should somehow also be involved in ending the conflict. If we take the case of the Kenya 2007-2008 election crisis, it was very important to have the elite –the Track 1, political level, in the process mediated by Kofi Annan, but the conflict was shaping a whole of society. So it is also very important to have a civil society involved in the process, even if the civil society was also polarized and split by the conflict. And it was important because the analysis is different by the civil society, then that of by the political elite. They can have ideas that the political elite may not have.

And finally, if you strike a deal at the Track 1 level, without any involvement, consultations, exchange with civil society, you may reach an agreement, but that is not seen as legitimate and that may not be sustainable in the eyes of civil society. So in case of Kenya, they had multi-track process (Track 1 and Track 2 combined). The mediator Kofi Annan consulted and talked to civil society actors, to observe their analysis, their ideas. He also gain guarantees from the civil society representatives that they will agree and carry on the agreement, in case it is signed at the Track 1 level.