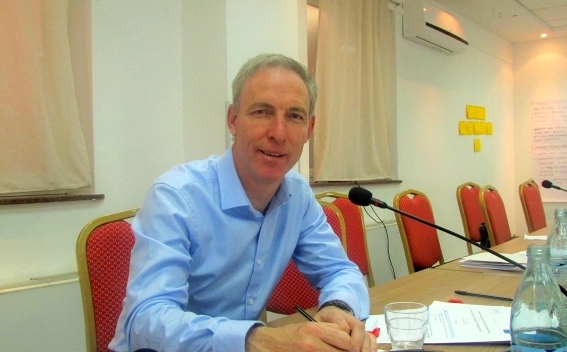 “Armedia IAA” presents an exclusive interview with a former Cabinet Minister in the UK government, a person, who was actively engaged in the campaign against the Scottish independence referendum, Rt. Hon. Jim Murphy.  The interview was conducted in the framework of the workshop "The Complexity of Peace Processes: Learnings from Northern Ireland and Scotland cases" held in Yerevan on September 25-28*.

-  Will you, please, share your impressions from the project in general?

-  Well, I enjoyed being here, in Yerevan. It is my first visit to Armenia. The project is really very professional. It was good to have here people from Northern Ireland and Scotland as well as experts from Armenia to talk about resolution of conflicts.  Every situation is different. We are not here to tell the people you must follow the path, you must do what happened in Northern Ireland, you must negotiate like it happened in Scotland. People make their own choices about what they learn from international experiences, but it was good to share that experience.

-  Whenever we speak about conflict resolution we underline the importance of inclusion of all layers of society in the process. You have held number of important positions in the UK government, will you share from your experience how it was possible for you personally and for your government in general  to manage to ensure that large inclusion necessary for conflict resolution?

-  When I was a minister in the British government, in the actions of the British government towards Northern Ireland it was very hard to make sure that everyone was included in the process. We had people, who faced violence in the past and consequently had disagreements with one another. In case of Scotland we had another situation. It was not resolution of violent conflict but resolution of conflicting views on whether Scotland should remain part of the United Kingdom or not.  And there were discussions, negotiations, referendum about that.

-  You were one of the politicians that were for remaining Scotland as part of the UK, which is a democratic country. Would your stance be the same stance on the issue if the UK was not a democratic country and people in Scotland knew that their basic rights cannot be protected within the UK?

It is hard to speculate what will happen if Scotland was a member of an undemocratic state, because United Kingdom is democratic and the existence of referendum proves it. Every situation is entirely different and what we have been trying to do here within the last few days was to say here what happened in Northern Ireland, here what happened in Scotland, two different situations. Listen to it, if you can and if you think that there is anything to learn from us that is good. I am pleased that Scotland has decided to remain within the United Kingdom, because it is good for United Kingdom and for Scotland, as well.

-  You have rich experience in diplomacy. Would you share some lessons from your experience?

-  At times I frequently visited Georgia because relationship between Georgia and Russia was very-very poor and of course at that time there was brief conflict between Russia and Georgia.  Lessons taken from the time in the UK Ministry of Foreign Affairs is that you have to listen to other people, you have to figure out where they are right and where you may be wrong, because no one in  life is always right and almost no one in life is almost wrong.  This is very important in international relations.

Politicians have to rehearse their public arguments why we wanted this way. However, if all you are going to do is to rehearse your public arguments, there is no point in meeting. Through time you are to be willing to go to compromises. Sometimes people see compromise as a weakness; however reasonable compromise is a real strength, because you have got the strength to give up some of your arguments and also willing to go then home and be able to persuade your public.