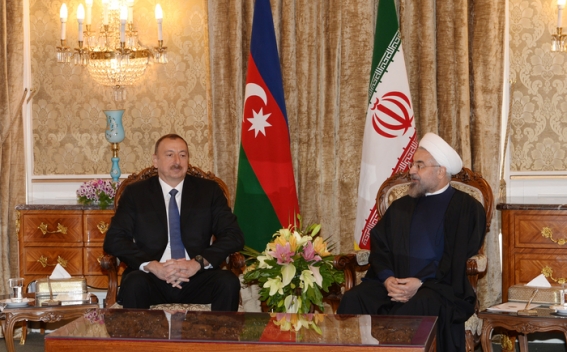 Iran’s President Hassan Rouhani is expected to visit Baku within the next couple of months. According to Trend Agency, this was declared by Iranian Vice-President and head of the Cultural Heritage Organization Massoud Soltanifar.

"President Hassan Rouhani's upcoming visit to Baku will boost the level of cooperation between Iran and Azerbaijan," a senior Iranian official said.

He noticed that Iranian President Rouhani and his Azerbaijani counterpart Ilham Aliyev have met six times over the past two years, adding that the Presidents are determined to boost bilateral ties. According to Soltanifar, Tehran and Baku have agreed on over 40 deals during this time.

It should be reminded that Aliyev's last visit to Tehran took place on February 2016. The two sides signed 11 agreements covering various areas of cooperation between Tehran and Baku. Earlier almost immediately after the signing of the Geneva agreements on lifting sanctions against Iran, the first visit of a delegation from Iran headed by a senior official (Iranian First Vice President Ishaq Jahangir) was done to Armenia.

After the Karabakh four-day war the visit of the Iranian President to Azerbaijan gets a completely different coloring and it cannot be considered only in the context of bilateral relations.

It should be noted that at the beginning of April, during fierce fighting on NKR-Azerbaijani border, Iran avoided expressing support to any of the conflicting sides. At the same time all the signals from the Islamic Republic of Iran indicated that official Tehran has a clear understanding of the logic of the events and tries to face the challenges arising from the current situation and to use the given opportunities.

From this point of view it is expected that one of the main issues that will be discussed during the talks between Aliyev and Rouhani will be the Karabakh conflict. It should not be forgotten that besides the neutrality Iran is also trying to come up with some mediation initiatives. And this issue will probably be discussed during the meeting of two Presidents.

By the way, the logic of the Iranian-Azerbaijani talks will hardly contradict the Russian approach on this issue. Iran and Russia are against the interference of foreign powers in regional affairs. At the same time both Iran and Russia are trying to keep (and if possible extend) their influence on Azerbaijan, preventing Ankara's growing influence in Baku.