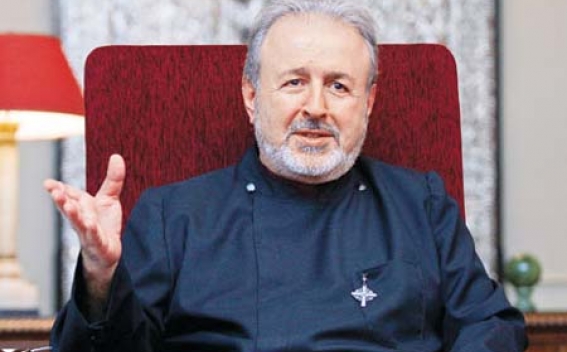 Archbishop Aram Ateşyan, General Vicar of Armenian Patriarch in Turkey, sent a letter to President Erdoğan about the Armenian Genocide resolution of Bundestag, in which he expresses his regret for this resolution. As Agos writes, the letter reads as follows:

The decision that Bundestag made about the events happened during the tragic times of World War I caused regret in our nation. As the Turkish Armenians society, we submit our regret to your dignified office as an expression of our heartfelt and sincere feelings.

Armenian Patriarchate in Turkey is a religious institution which performs its obligations to the state perfectly and got over the delusion of seeing itself different from the other citizens. Also, its maxim is to express the feelings of Christian-Armenian Turkish citizens, who know how to protect their rights when necessary. The Patriarchate is aware of the fact that some people are not happy with its stable attitude that it maintains by abiding the traditional way. Our late patriarchs not only provided religious services to our community with their statements and constructive attitude, but also put their stamps on the history with their exemplary behaviors, which still guide us today.

In this regard, it is unacceptable that a parliament, which was formed by the votes of German citizens and has the duty of establishing laws for the peace, prosperity and security of their nation, expressed its opinion, though it has no right to do so. It is unacceptable that this parliament legalized its decision on behalf of the entire German nation and considers itself a judge.

Sliding the role of German Reich over by a few sentences and pointing the Ottoman Turkey as the sole perpetrator is ethically controversial. It is also questionable to what extent this decision expresses the feelings of German citizens.

As we stated on number of occasions, using this tragedy that traumatized the Armenian nation in international politics causes sorrow and pain. This resolution and similar resolutions hit us hard. Unfortunately, this historical pain of Armenian nation is considered as a tool for accusing and punishing Turkish state and nation. And because of this ugly mentality, sub- and supra-identities of Turkish Armenians are harmed. The ones who are willing to see the truth can realize how Armenian nation has been abused by imperialist powers.

Turkish and Armenian peoples have to live together. These two ancient and neighboring peoples shouldn't be driven apart from each other by hatred inciting discourses. Instead of politicizing the history, the aim should be the fellowship and peace. Two neighboring peoples, who have common history and similar traditions, will live together with peace one day, as long as we deem it possible and prevent the unnecessary steps.

"Some people will react against this attitude"

In a world where politicians express their opinions about our people's suffering by taking their interests into account, we, as the Patriarchate, will continue to pray for the fellowship of Turkey and Armenia. This attitude is the force of our faith and the expression of our sense of citizenship. On the other hand, we know that some people will react against this attitude of ours. May God take root in the hearts of the citizens of the both countries. May God help the souls who devote themselves to create what is good.

On this occasion, we once again express our regret and pray to God for bestowing health, success and happiness on you. Also, we pray to God for making the state dignitaries, who work for the good of people, succeed in their services.