Two Stamps Dedicated to 25th Anniversary of Independence of Armenia 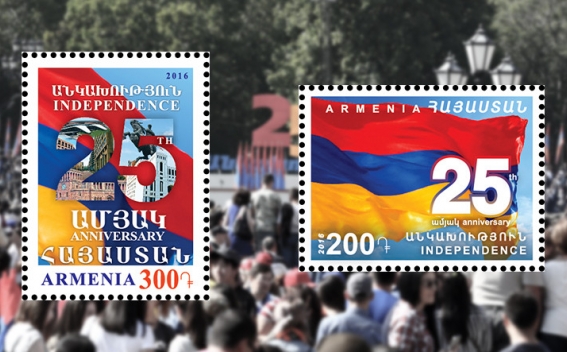 On September 21, 2016 “HayPost Trust Management” B.V. puts into circulation two stamps dedicated to the 25th anniversary of Independence of the Republic of Armenia.

The stamps have been printed in “Cartor” Printing House, France, with face values of 200 and 300 Armenian drams.

The stamp with face value of 200 drams depicts “25th anniversary” and “INDEPENDENCE” texts, as well as the waving tricolor flag of the Republic of Armenia on the background of blue sky symbolizing the twenty five years of independence and statehood of the country.

The stamp with face value of 300 drams depicts “25th anniversary” which consists of a collage made with the sights of Yerevan showing thus the advancement of the country through twenty five years of its independence.