Events Within the "Days of Artsakh in France" Festival Underway 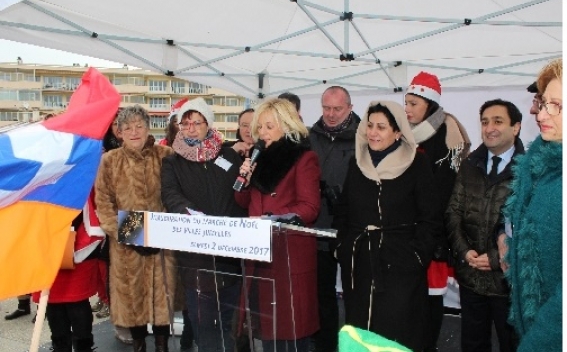 The "Days of Artsakh in France" Festival, which took off on November 21 with a  solemn event held in the city of Villeurbanne, with the participation of President of the Republic of Artsakh Bako Sahakyan, is underway.

Recently, the cities of Valence and Bourg-lès-Valence of Drome Department have hosted the Festival, where numerous events presenting the culture and way of life of Artsakh are held.

In early December, the documentary "We are Our Mountains" by French-Armenian film director Arnaud Khayadjanian was shown in Valence as well as the ceremonial opening of French photographer Yvan Travert's "Artsakh: the Spirit of the Land" exhibition took place. Within the 15-day exhibition, visitors will also see the animated film "Artsakh in 180 Seconds" by Hulé Kéchichian. It is noteworthy that the exhibition was included in the school program of Valence, thanks to which the schoolchildren of Valence had the opportunity to familiarize themselves with Artsakh.

At the New Year Fair in the town of Bourg-lès-Valence, the Artsakh pavilion was also presented, where brochures with information about Artsakh, tourist guides and Artsakh products were exhibited. In his speech at the ceremonial opening of the fair, Mayor Marlène Mourier reaffirmed her support for Artsakh, in particular, stating, "Since the signing of the Declaration of Friendship with Shushi in 2014, Bourg-lès-Valence has been standing by the people of Artsakh".

The 10-day "Pilgrimage to Artsakh" exhibition of works by famous French graphic artist Sylvain Savoia has started in the Drome Department Council building.