The Right to Self-Determination in 2017 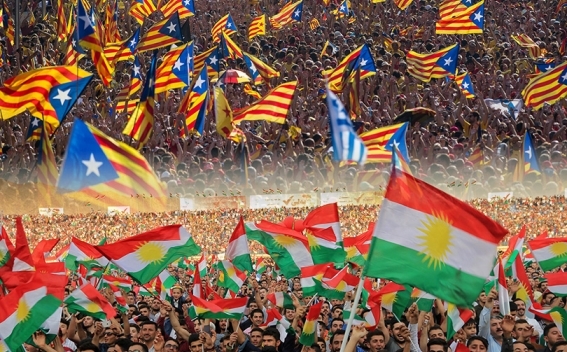 Among the most prominent and important events of 2017, the struggle for the right to self-determination of peoples stands out. Independence referendum held in Catalonia on October 1 and the following events were discussed the most.

There is a variety of obvious reasons why Catalonia was trying to be independent from Spain: the nationalism of the Catalans, national and linguistic features and differences from the rest of Spain and economic and political reasons, of course.

In June, the Catalan Government announced about the upcoming independence referendum that was to be held on October 1 to which Madrid reacted unambiguously: all measures will be taken to prevent the ’’controversial’’ referendum, and the Constitutional Court banned the referendum.

Nevertheless, the promised referendum took place with the active intervention of Spanish police.  In spite of this, the Catalans voted for independence. According to the Catalan Government 90% or 2.020.144 people, participating at the referendum voted in favor of independence. A couple of days later Carles Puigdemont, the head of Catalan Autonomy announced the independence of Catalonia, and Madrid didn’t recognize the referendum and the ’’declaration of independence’’ of Catalonia. Madrid gave Puigdemont time to ’’fix his mistakes’’ threatening to apply the Article 155 of Spain’s Constitution. And so it happened. Spanish Senate decided to implement direct governance of the Catalan Autonomy. The Catalan Parliament was dissolved, too. After retiring from the post Puigdemont left for Belgium and other representatives of Catalan authorities were detained.

New demonstrations started in Catalonia and in Basque Country that were dissatisfied about Madrid’s decision on Catalonia, as they also are interested in self-determination issues.

On December 21, extraordinary parliamentary elections were held. Interestingly, the parties  that are in favor of independence won the elections taking 70 mandates out of 135 in Catalan Parliament.

The thing is that the EU had a very careful approach to the self-determination issues. The comments of European politicians were indicating that they are preoccupied that this could have a domino effect and become a precedent to other peoples’ struggle for self-determination in other countries. And not long after the Catalan referendum, in the second half of October two northern Italian provinces, Lombardia and Veneto held a referendum to expand their autonomy. 98% of Veneto and 95% of Lombardia voted for independence. Although the results of the referendum were not binding, this step was very important as it was the first time that any province in Italy holds such a referendum.

The wave of self-determination reached also France’s New Caledonia. In contrast with Catalonia, authorities of France and local parties have come to an agreement on referendum issue. According to the latest news it is going to be held in November, 2018. Although New Caledonia is of strategic importance to France, it is not afraid of the domino effect (for French Polynesia, for example), as each French province has its own relations with Paris.

Another vital independence referendum was held in Iraqi Kurdistan. For Kurds, this referendum was a demonstration of long-standing historical struggle for independence. Here, the situation was not so definite. Not all the parties supported the decision to hold a referendum as not everyone wanted Massoud Barzani to lead Iraqi Kurdistan. USA, Russian Federation, Iran, Turkey, Syria and Iraq, of course, were speaking against the referendum. If they had a success, the Kurdish population of the neighbor countries would join them. The only country that expressed support to Iraqi Kurdistan was Israel.

In spite of the ban by Iraqi Parliament, the independence referendum was held on September 25. 92% voted for independence.

After the results were announced the relations between Iraqi Kurdistan and other countries of the region deteriorated. They started to threaten the Kurds, even military clashes took place in some cases.

As Barzani had promised, after the referendum, independence was not declared. In the end, Iraqi Kurds froze the results of the referendum and lost the territories over which they had gained control. Massoud Barzani also lost the fight maybe because he hadn’t calculated the possible outcomes and interests of stakeholders.

Anyway, the relations between Baghdad and Erbil remain very strained, and the population of Iraqi Kurdistan does not calm down.

So, the referendums held in Catalonia and Iraqi Kurdistan brought the issues of the peoples’ self-determination to the international agenda. Regardless of the further developments on these issues, due to them the international community again started to pay special attention to one of the most important principles of international law, that is used only with double standards.