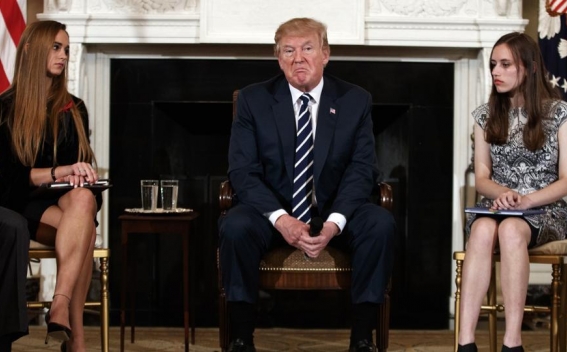 Donald Trump has said he will consider a proposal to arm school teachers in an attempt to prevent mass shootings, a move certain to prove fiercely divisive, The Guardian reports.

The US president, holding a listening session at the White House with survivors of last week’s Florida school shooting and others affected by gun violence, claimed that allowing airline pilots to carry and conceal guns had demonstrated the measure could be a success.

"It only works when you have people very adept at using firearms, of which you have many," Trump said during an emotionally searing session that, extraordinarily, was broadcast live on national television. "It would be teachers and coaches."

Trump added: "An attack has lasted, on average, about three minutes. It takes five to eight minutes for responders, for the police to come in, so the attack is over. If you had a teacher who was adept at firearms, they could very well end the attack very quickly."

The president asked for a show of hands in the room over the proposal: some were in favour, others were against. "We can understand both sides and certainly it’s controversial," he acknowledged, promising to discuss it seriously.