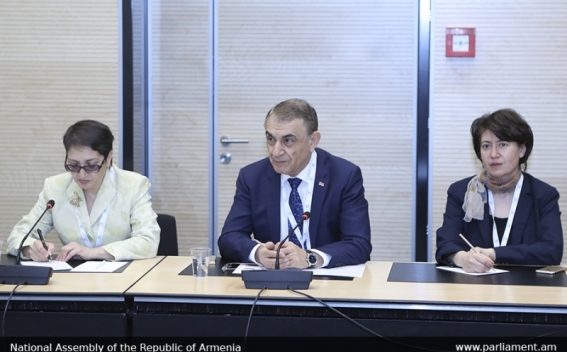 Ara Babloyan highly assessed the Armenian-Cypriot friendly relations, underlining that the two peoples connect historical-cultural, spiritual and system of values commonalities, and its vivid evidence is the fact of recognizing and condemning the Armenian Genocide by Cyprus in 1975.

The NA President expressed his gratitude for the unanimous adoption of the Resolution criminalizing the denial of the Armenian Genocide by the House of Representatives of Cyprus. He has expressed conviction that Armenia will continue making efforts in recognition, condemnation and prevention of genocides.

Noting that the parliamentary relations between Armenia and Cyprus due to joint efforts of recent years reached to a new qualitative level, Ara Babloyan underlined the need of enlivening the works of the Committees functioning in two legislative bodies and the activation of the delegations’ mutual visits.

In the settlement of Karabakh conflict the RA NA President highly assessed the inflexible support of the Cypriot authorities in the efforts of the OSCE Minsk Group Co-Chairs. The Head of the RA Parliament reaffirmed that the authorities of Armenia always supported and would support Cyprus in the Cypriot problem on international  different platforms.

Ara Babloyan also touched upon the signing of Armenia-EU Comprehensive and Enhanced Partnership Agreement, expressing hope that Cyprus would quickly reach to an end the necessary inner-state procedures for Armenia-EU Agreement to enter into force.

The Head of the RA Parliament also talked about the effective cooperation of the parliaments of the two countries in the international structures, the peoples’ centuries-old friendship and the Armenian community making it firmer.

Demetris Syllouris proposed Ara Babloyan to develop the strategic cooperation based on the implementation of the concrete programmes in different spheres. The sides agreed to touch upon this issue during the visit of the Cypriot delegation to Armenia to be held in the future and take more practical and concrete steps.