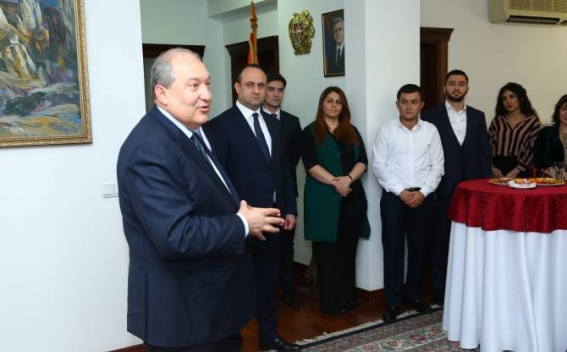 Armen Sarkissian, who was elected President of Armenia by the Parliament on March 2, met with more than two dozen representatives of the Kazakh-Armenian community in Astana on April 3,  Armenpress reports.

Addressing the community representatives during the reception organized in the Armenian Embassy, the President-Elect introduced Armenia’s foreign and domestic challenges, the steps of the country’s leadership aimed at socio-economic development, deepening the Armenia-Diaspora connetions, as well as attached importance to the preservation of cultural, linguistic and national identity of Armenians living in Kazakhstan.

During the meeting Armen Sarkissian got acquainted with the main activity directions and programs of Armenian businessmen, cultural figures, urged them to make efforts aimed at uniting the community, assist the youth in receiving contemporary education, further intensify the ties with the Armenia.