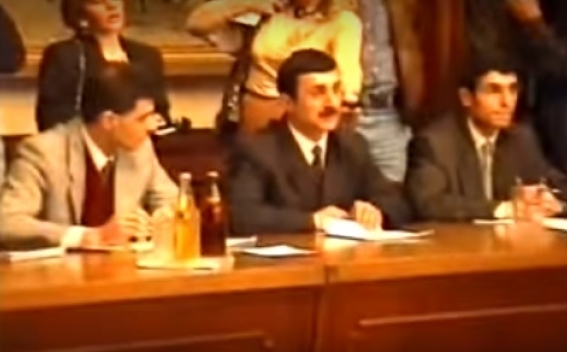 Today, on May 12, 25 years have passed since the Ceasefire Agreement in Karabakh conflict zone entered into force. Exactly 25 years ago large-scale military actions in Karabakh were stopped, but peace - in the full sense of the word - has not come yet...

"Responding to the call for a cease-fire, as set out in the Bishkek Protocol of May 5, 1994, and based on the Protocol of 18 February 1994, the conflicting Parties agreed on the following:

Vladimir Kazimirov, who from 1992 to 1996 was the head of Russia’s intermediary mission on Karabakh settlement, representative of the President of Russian Federation on Nagorno Karabakh issue and also participant and co-chairman of the OSCE Minsk group from Russia, wrote: "It seemed the way to the agreement was open. But even a trifle could destroy everything. The Azerbaijani leadership wanted to sign a ceasfire with Armenia. The latter, however, did not want this without the participation of Stepanakert. To exclude their representatives  meant to save time and lose the chance to change the situation on the frontline. It was only left to get around the whims of the parties and sign the document in any suitable form."

The text of the Agreement had to be out in 3 different pages for the three sides to sign it. The Azerbaijani Defense Minister Mamedrafi Mamedov signed the sheet on May 9, 1994 in Baku in the presence of the Russian mediator. On May 10 the second sheet was signed on Yerevan by his counterpart Serzh Sargsyan and on May 11 the third one  - in Stepanakert, by Nagorno Karabakh Army Commander Samvel Babayan. These three sheets signed by three sides separately, were put together in Moscow, and became a ceasefire agreement of Nagorno-Karabakh. Russia, as a mediator, decalred the Ceasefire to enter into force on May 12.

Masis Mailyan, now head MFA of NKR, writes: "As an eyewitness and one of the participants in the negotiations that took place during the war and postwar years, I can state that in the 1992-1993 ceasefire in the zone of Karabakh conflict was declared up to ten times: as the signatories of the agreement were the two main warring parties - the NKR and Azerbaijan. However, unlike the ceasefire agreement, signed on May 12, 1994, the previous agreements had short life. The basis for the formation of the existing truce was put on May 5, 1994 in the capital of Kyrgyzstan, where the heads of the parliaments of the NKR, Azerbaijan and Armenia discussed the situation in the region and adopted the "Bishkek protocol" (the Azerbaijani side joined the protocol three days later, with some reservations). On May 16, 1994 in Moscow with the mediation of the Russian Defense Minister Pavel Grachev a meeting of the Defense Ministers of NKR, Azerbaijan and Armenia was held. At this meeting, Samvel Babayan, Mamedrafi Mammadov and Serzh Sargsyan reiterated the commitment of their countries on the reached Ceasefire Agreement. On July 27 and August 28 of the same year, the parties reaffirmed their commitment to respect the ceasefire, until signing a peace treaty…"

Despite the fact that Azerbaijan dared to resort to blitzkrieg, the losses of Azerbaijan is so touchable that it will remember the four-day war in April for a long time. Meanwhile, Armenia and Karabakh have repeatedly expressed their willingness to strengthen the ceasefire. The most important proof of this is that Armenia and NKR are ready to withdraw snipers from the front line, on what Azerbaijan does not agree.

Whatever we say, the ceasefire, despite the violations and instability, however, 25 years ago brought peace to the region. The bombings, large-scale military actions were stopped and most importantly - psychology of war disappeared. A generation grew, who understands and realizes: a variety of issues and disagreements can be resolved not on the battlefield and with strength, but at the table of negotiations and through dialogue. If we assume that, in addition to peace in the region, this is also considered an achievement of the Ceasefire Agreement, then the signed document of 25 years ago is really priceless. But most importantly, this agreement today can become the basis for large-scale peace treaty, which could bring to the region more stability, long-term and more realized peace...