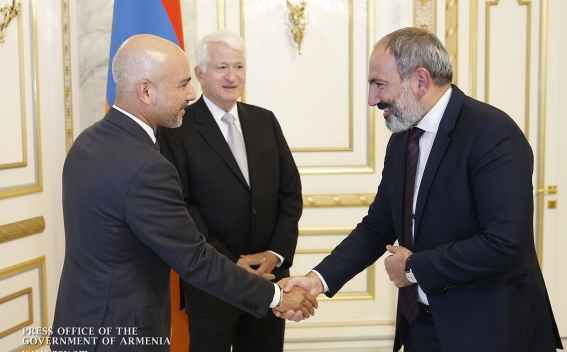 Welcoming the guests to the Government of the Republic of Armenia, the Premier hailed the development of cooperation between Armenian higher educational institutions and the University of California, Los Angeles, which in turn may contribute to the deepening of Armenian-American educational ties.

Nikol Pashinyan touched upon the democratic changes underway in Armenia, noting that what happened in our country was not only a political event, but also a cultural and educational revolution which opened up vast opportunities for the launch of drastic reforms in the field of education

The Prime Minister stressed that education is one of the cornerstones of democratic development and economic progress, and considering Armenia’s huge innovational and IT potential, the Government of Armenia seeks to convert Armenia into a technological country.

Eric Esrailian and Gene Block wished the Government every success on the way to implementing its reform agenda, including the educational reform. They expressed readiness to support this process through the development of entrepreneurship, technology, engineering, exchange of experience and academic programs. Eric Esrailian advised that the University of California is going to open a center of Armenian studies in the near future.