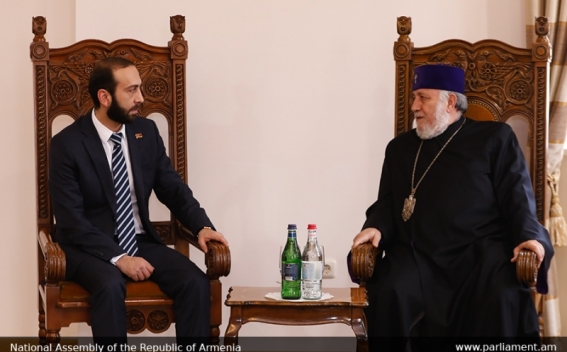 Armenian National Assembly Speaker Ararat Mirzoyan visited Mother See of Holy Etchmiadzin on January 25 and met with Catholocos of All Armenians, His Holiness Karekin II, News.am reports. During the meeting the Catholicos once again blessed the parliament and Ararat Mirzoyan, wishing them to be able to make the country prosperous, the press service of the parliament reported.

Thanking for the congratulation and the best wishes, the Speaker of the parliament emphasized the key role that the newly elected MPs have for establishing a new culture in Armenia. Mirzoyan noted that the Church, like the parliament, have a very important mission, which is to serve the people. The Speaker highly assessed the role of the Armenia Apostolic Church in the lives of the people and the mission of preservation of the Armenian identity in Diaspora. The sides underlined the importance of future deepening the cooperation between the Church and the National Assembly.