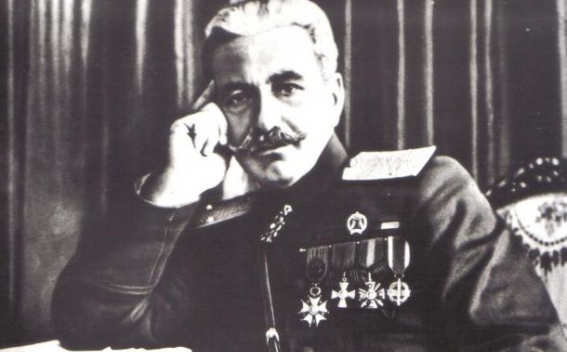 Today, on February 25, is Zoravar Andranik’s birthday. Zoravar Andranik, as he is mostly known among people with this name, is considered a national hero by Armenians worldwide.  He is an Armenian military commander and a key figure of the Armenian National liberation movement. Andranik was considered a hero not only after his death, but during his lifetime.

Andranik Ozanian was born on 25 February, 1865 in Shabin-Karahisar(today’s Turkey). After graduating from school Andranik joint the struggle of the Armenians against the Ottoman Empire. In 1882, Andranik was arrested for assaulting a Turkish gendarme who was persecuting Armenians. However, with the help of his friends, he escaped from prison.

In the late 1880s he became active in an armed struggle against the Ottoman government and Kurdish irregular forces. During the Hamidian massacres (1894-1896), Andranik with other fedayis (Armenian civilians who voluntarily left their families to form self-defense units and armed bands in reaction to the mass murder of Armenians) defended the Armenian villages of Mush and Sasun from attacks of the Turks and the Kurdish Hamidian units.

In November 1901, Andranik led the fedayis in the Battle of Holy Arakeloc Monastry. It is one of the best-known episodes of Andranik's revolutionary activities.

In 1904, Andranik organized an uprising in Sasun, but after several weeks the Ottoman forces and Kurdish irregulars suppressed this uprising. Andranik and his group had to escape to Persia. From Persia, Andranik moved to the Caucasus, then left Russia and traveled to Europe, where he was engaged in advocacy in support of the Armenians' national liberation struggle.  Within the outbreak of World War I, Andranik returned to Armenia. He was appointed the commander of the first Armenian volunteer battalion by the Russian government. In 1916 the Russian government ordered the Armenian volunteer units to be demobilized. Andranik left for Armenia.

On 28 May, 1918 the Armenian National Council declared the independence of Armenia and signed the Treaty of Batum with the Ottoman Empire, by which Armenia gave up its rights to Western Armenia. Andranik did not accept the existence of the First Republic of Armenia as a large area that the Armenians wanted to make independent was not included in it.  Thus Andranik, independently from the Republic of Armenia, fought in Zangezur against the Azerbaijani and Turkish armies and helped to keep it within Armenia.

Andranik disbanded his division and handed his belongings and weapons to the Catholicos and left Armenia in 1919. In 1922 Zoravar Andranik settled in Frezno (in the USA), where he lived till his death, August 31, 1927. In 1928 his remains were moved to France and buried in Père Lachaise Cemetery in Paris. And only 15 years ago the Armenian and French governments arranged to transfer Andranik's body’s remains from Paris to Yerevan. Andranik was re-interred at Yerablur military cemetery in Yerevan on February 20, 2000,