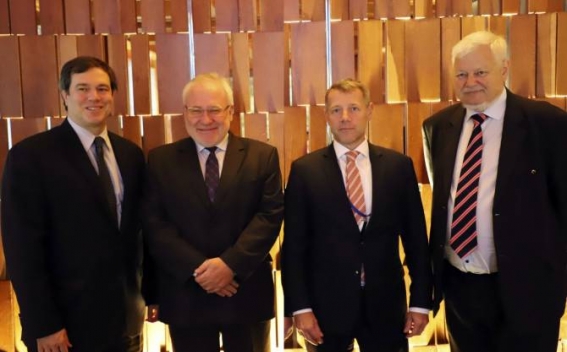 Co-Chairs of the OSCE Minsk Group (Igor Popov of the Russian Federation, Stephane Visconti of France and Andrew Schofer of the United States of America) issued a statement on the upcoming meeting of Armenian Prime Minister Nikol Pashinyan and Azerbaijani President Ilham Aliyev. Press service of the OSCE informed Armenpress that the statement runs as follows:

"In their March 1 statement, the Co-Chairs of the OSCE Minsk Group (Igor Popov of the Russian Federation, Stephane Visconti of France and Andrew Schofer of the United States of America) welcomed the commitment of Azerbaijani President Ilham Aliyev and Armenian Prime Minister Nikol Pashinyan to meet soon under the auspices of the Co-Chairs. The Co-Chairs, working closely with the two foreign ministers, have been making preparations for this important leaders’ meeting, which will be the first direct contact between the two leaders conducted under Co-Chair auspices.

The Co-Chairs underline the importance of maintaining an environment conducive to productive discussions and continue to assess positively the recent lack of casualties on the front lines. The Co-Chairs also welcome some initial steps being taken in the region to prepare the populations for peace and encourage the sides to intensify such efforts. At the same time, the Co-Chairs reiterate the critical importance of reducing tensions and minimizing inflammatory rhetoric. In this context, the Co-Chairs urge the sides to refrain from statements and actions suggesting significant changes to the situation on the ground, prejudging the outcome of or setting conditions for future talks, demanding unilateral changes to the format without agreement of the other party, or indicating readiness to renew active hostilities.

With reference to some contradictory recent public statements on the substance of the Minsk Group process, the Co-Chairs reiterate that a fair and lasting settlement must be based on the core principles of the Helsinki Final Act, including in particular the non-use or threat of force, territorial integrity, and the equal rights and self-determination of peoples.  It also should embrace additional elements as proposed by the Presidents of the Co-Chair countries in 2009-2012, including: return of the territories surrounding Nagorno-Karabakh to Azerbaijani control; an interim status for Nagorno-Karabakh providing guarantees for security and self-governance; a corridor linking Armenia to Nagorno-Karabakh; future determination of the final legal status of Nagorno-Karabakh through a legally binding expression of will; the right of all internally displaced persons and refugees to return to their former places of residence; and international security guarantees that would include a peacekeeping operation.

The Co-Chairs stress their view that these principles and elements must be the foundation of any fair and lasting settlement to the conflict and should be conceived as an integrated whole.  Any attempt to put some principles or elements over others would make it impossible to achieve a balanced solution.

The Co-Chairs are prepared to meet with the leaders and foreign ministers of Armenia and Azerbaijan at any time, and call on the leaders to resume negotiations in good faith at the earliest opportunity.  Continuous and direct dialogue between Baku and Yerevan conducted under the auspices of the Co-Chairs remains an essential element in building confidence and advancing the peace process.  The Co-Chairs will also continue to discuss, as appropriate, relevant issues with the interested parties directly affected by the conflict, recognizing that their views and concerns must be taken into account for any negotiated solution to succeed.

The Co-Chairs stress that they remain fully committed, in accordance with their mandate, to helping the sides find a peaceful solution to the conflict. The Co-Chairs also express their full support for the impartial and critical monitoring work undertaken by the Personal Representative of the OSCE Chairperson-in-Office and his team".