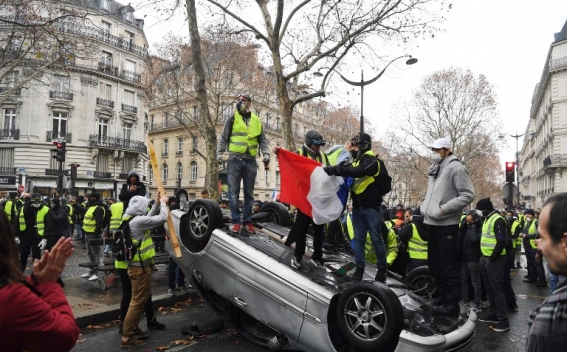 Demonstrators have looted shops in Paris in a resurgence of the Gilets jaunes ("yellow vest") protests that have been taking place across France for 18 weeks, BBC reported.

They began over fuel tax rises but have developed into a revolt again elitism.

Police used water cannon and tear gas to disperse the protesters, who had dwindled in numbers in recent weeks before Saturday's uptick.

As well as a surge in numbers on Saturday, there was a return to the levels of violence that characterised some of the earlier protests. Shops including a Boss menswear store were ransacked and fires were lit in the streets, with at least one car set ablaze.

Interior Minister Christophe Castaner said he had given an order to respond to the "unacceptable attacks with the greatest firmness".

"Let there be no doubt: they are looking for violence and are there to sow chaos in Paris," Mr Castaner said in a tweet.