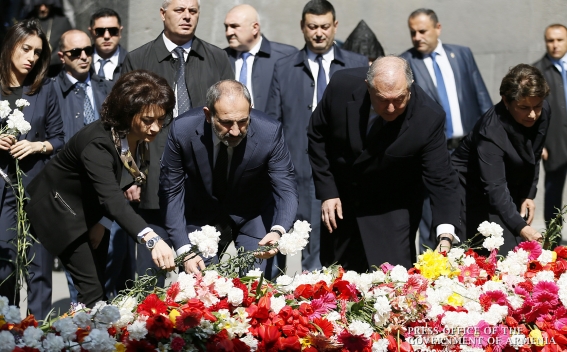 Catholicos of All Armenians, His Holiness Garegin II presided over the Service of Invocation, dedicated to the holy martyrs of the Armenian Genocide.

Later on, Prime Minister Pashinyan and Mrs. Anna Hakobyan visited the Armenian Genocide Museum-Institute and got acquainted with the exhibits on display at the exposition referred to as “150-year-old witnesses of the Armenian Genocide: Komitas Vardapet and Hovhannes Tumanyan.”

Dedicated to the 150th anniversary of great Armenian intellectuals Komitas Vardapet and Hovhannes Tumanyan, the exposition seeks to inform the public about the history of the Armenian Genocide.

The exhibition has two key aspects: on the one hand, it presents the friendly and creative ties between the two geniuses, and on the other hand, the impact the Armenian Genocide on their lives. The bilingual (in Armenian and English) exposition, consisting of eight parts, comprises both original materials from the collections of the Armenian Genocide Museum Institute and materials and photographs from various archives and museums of Armenia.

Authored by Bitlis resident Agavni Mkrtchyan, who had survived the genocide, a video on how Tumanyan organized assistance for refugees in Echmiadzin in 1915 is presented for the first time. There are exceptional exhibits, including a beads-scores made by Varderes Atanesyan during the years in exile with the engraved names of 99 intellectuals, including the name of Komitas Vardapet on the first bead.

The exhibition is accompanied by Araks Mansuryan’s performance of Komitas’s unfinished Anush opera, which is based on the eponymous poem by Tumanyan. Sketches from Komitas series, authored by famous Armenian painter Sarkis Muradyan, are also presented. The exposition will be on until August 30, 2019.