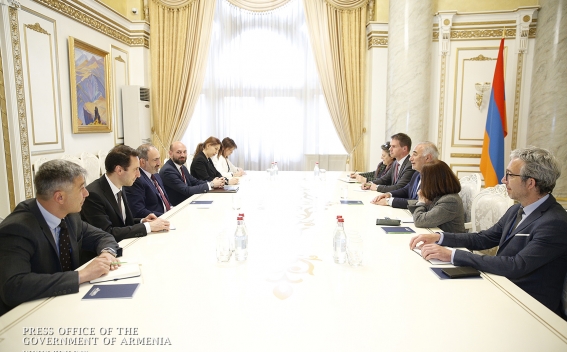 Prime Minister Nikol Pashinyan received First Deputy Mayor of Lyon Georges Kepenekian. The meeting was attended by Ambassador Extraordinary and Plenipotentiary of the French Republic to the Republic of Armenia Jonathan Lacôte.

Welcoming Mr. Kepenekian to Armenia, the Prime Minister hailed his personal contribution to the development and strengthening of Armenian-French relations. Nikol Pashinyan praised Georges Kepenekian’s efforts aimed at promoting the international recognition of the Armenian Genocide.

"I wish to express my appreciation to French President Emmanuel Macron for declaring April 24 as the Day of Remembrance of the Victims of the Armenian Genocide in France. This highlights the special character of relations between our peoples and countries," Nikol Pashinyan said.

Noting that he is very enthusiastic about the events taking place in Armenia, Georges Kepenekian said our country sets a model of positive change. "We have a new chapter of history in Armenia, and the country is today perceived as a positive model of change," he said. The First Deputy Mayor of Lyon said he had discussed the prospects and vectors of bilateral cooperation with the Mayor of Yerevan.

During the meeting, reference was made to the Armenian-French decentralized cooperation and Armenia-Diaspora relations.

Touching upon the fire that devastated the Notre-Dame Cathedral in Paris, Prime Minister Pashinyan expressed confidence that the progressive humanity will come together to restore that unique value of civilization.