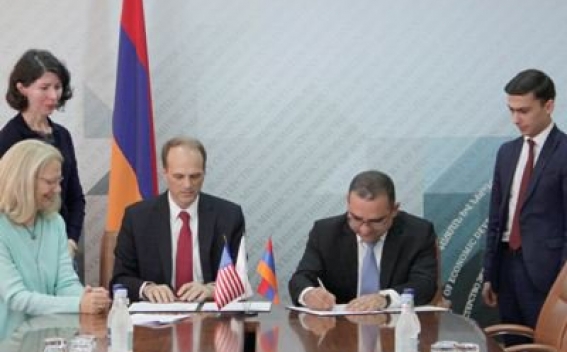 The Armenian Ministry of Economic Development and Investments signed on Wednesday the Amendment to the Agreement on the More Competitive and Diversified Private Sector Assistance between Armenian and US Governments, the Ministry’s press service reported.

The document was signed by the Government of Armenia, the Armenian Minister of Economic Development and Investments Tigran Khachatryan, the US Government, the US Agency for International Development (USAID) Armenia Program Director Deborah Grizer and USAID Deputy Director for Europe and Eurasia Alex Sokolovsky.

The USAID-funded 12 draft amendment envisages an additional $7,449,000 grant to finance the USAID-funded project in infrastructure, agriculture and tourism.

"In consultation with the US Agency for International Development, we will ask for assistance in the development of tourism, agriculture, in general, small businesses, which we consider to be the most inclusive growth for economic development and for our people,” Khachatryan noted.

According to Alex Sokolovsky, the USAID is helping partner countries in every possible way to develop their abilities to rely on their own strengths.

“We are delighted to see how our continuing cooperation will provide further development and development,” he said.

The Agreement was signed in 2010 to provide assistance to the Armenian Government through USAID.