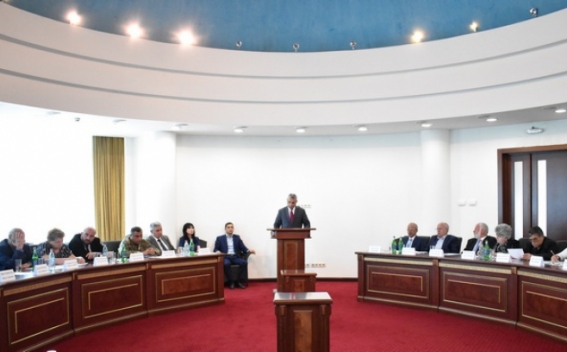 On May 10, at the initiative of the Foreign Ministry of the Republic of Artsakh, a conference dedicated to the 25th anniversary of the Agreement on the full cessation of fire and hostilities signed by Artsakh, Armenia and Azerbaijan was held in Stepanakert.

Former Co-Chairman of the OSCE Minsk Group Vladimir Kazimirov also participated in the conference as an honorary guest.

Foreign Minister of the Republic of Artsakh Masis Mayilian delivered a speech at the event.

In his speech, the Foreign Minister noted that the 25th anniversary of the Agreement is a good opportunity to evaluate the event, as well as summarize some results and outline the steps needed to strengthen the ceasefire regime and to increase the effectiveness of the process of peaceful settlement of the Azerbaijan-Karabakh conflict.

Noting the importance of the Agreement on the full cessation of fire and hostilities, Masis Mayilian, in particular, stressed that the termless trilateral Agreement of May 12, 1994 is, in fact, the only tangible achievement in the entire process of the conflict settlement, which put an end to the war unleashed by Azerbaijan against Artsakh and transferred the conflict to the political-diplomatic field. Thus, conditions were created for the parties to focus their efforts on finding ways for the final settlement of the conflict through negotiations, supported by the international mediators, The Ministry of Foreign Affairs of the Republic of Artsakh reports.

Masis Mayilian stressed that the Artsakh party had always adhered to the commitments assumed under the May 12, 1994 Agreement, as well as had repeatedly come forward with initiatives on ensuring the irreversibility of the peace process. As an example, the Foreign Minister noted the readiness of Artsakh authorities to provide the international mediators with the data of the video monitoring system on the situation on the border, adding that the aforementioned system could become part of the international mechanism for monitoring the ceasefire regime.

In this context, Masis Mayilian also noted the importance of implementation of the Agreements reached at the Summits in Vienna and St. Petersburg held after the April war of 2016.

In his speech, the Foreign Minister also stressed the issue of demarcation line of the conflicting forces, which all the three parties fixed as part of the ceasefire regime under the mediation of the Defense Ministry of Russia. Therefore, the implementation of the ceasefire agreement also means the restoration of the agreed ceasefire line, which was violated by Azerbaijan in April 2016.

Masis Mayilian expressed conviction that the combination and complementarity of the diplomatic and military-political conditions - restoration of the direct trilateral negotiations and consolidation of the ceasefire regime and ensuring the irreversibility of the peace process - will create the necessary preconditions for real progress in the process of peaceful settlement of the Azerbaijan-Karabakh conflict and for ensuring lasting stability in the South Caucasus.