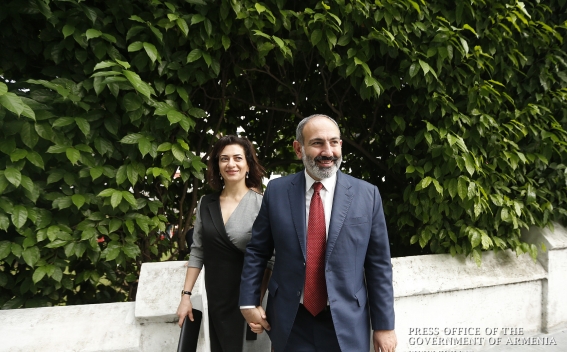 Accompanied by his spouse Anna Hakobyan, Prime Minister Nikol Pashinyan on July 7 arrived in Singapore on an official visit at the invitation of Prime Minister of Singapore Lee Hsien Loong.

The Prime Minister and Mrs. Anna Hakobyan visited the Armenian St. Gregory the Illuminator Church in Singapore, the oldest Christian institution in that country (1835).

The Prime Minister of the Republic of Armenia joined Senior Minister of Industry and Trade of Singapore Co Poh Koon, as well as the representatives of the Armenian communities of Singapore and neighboring countries and regions - Malaysia, Indonesia, Thailand, Hong Kong and Australia, to attend the unveiling of a sculpture of Vanda Miss Joaquim flowers at the First Botanic Garden on the newly opened Armenian Street adjacent to St. Gregory the Illuminator Church. The sculpture was contributed by the Armenian community on the initiative of benefactor Khajag Margaryan.

Referred to as Vanda Miss Joachim, the orchid, which is also known as Singaporean or Aloha Princess Orchid, is a hybrid species that has become the national flower of Singapore - a state symbol. The well-known type of orchid was named after Singapore-based Armenian florist Agnes Joachim (Ashkhen Hovakimyan) who discovered the flower in Yeghegnut.

Nikol Pashinyan, Anna Hakobyan next called at the St. Gregory the Illuminator Church and toured the Armenian Heritage Museum.

The Prime Minister signed the Book of Honorable Guests. Later on he met with the representatives of the Armenian communities from Singapore and the neighboring countries. In commemoration of the victims of the Armenian Genocide, the Premier laid a wreath at the Armenian cross-stone at the Memory Garden. There are many Armenian gravestones in the Garden.

Greeting those present, Nikol Pashinyan stated: “Today, through the efforts of our compatriots, we eternized our fellow countrywoman’s contribution to Singapore. You may know that Singapore’s national symbol, the orchid named after our compatriot, was created by Ashkhen Hovakimyan, known as Agnes Joachim in Singapore. This is a symbolic event, which demonstrates our nation’s creativity.”

According to Nikol Pashinyan, in many parts of the world we will meet situations where Armenians are behind the symbolic values created in their countries.

“I am convinced that this is a full description of our people’s essence. I think the peculiarity of the modern time is that the creative genius of the Armenians must ultimately triumph in Armenia as well. The way we have to go should help us join those countries to which our compatriots have made landmark contributions. Singapore is one of the miracles of the 20th century, analysts and economists have written volumes of stories to understand how it happened and eventually created a country every corner of which has a meaning that is a unique proof of development and human creative genius,” Nikol Pashinyan said, noting that his answer is one: the ability to organize and encourage human life.

“I consider it to be the main symbol of today. Today, in fact, we have put a record of the Armenian nation’s talent and genius. I hope the numerous examples of this kind should remind us everywhere that we are talented and creative people that have contributed to the development and welfare of many nations. We can do the same in the Republic of Armenia and I believe that today’s event is emblematic in this respect,” the Head of Government said.

The Prime Minster noticed that there are dozens of Armenians who have left an indelible mark in this country.

“Today millions of Armenians live in the Republic of Armenia; millions of people will be living there, which means that they can leave a similar indelible mark in Armenia and Artsakh,” Nikol Pashinian underscored and went on to note that we often failed to be the masters of our history, and the time has come to recreate the history of our own country.

“Let us create Armenia’s modern history in tune with our ancestors’ dreams. The time has come for a free, happy and powerful Armenia. Our worldwide trips inspire ever greater confidence that we will achieve that goal. We came to prove what has already been proven. The Armenians are talented people: long live Ashkhen Hovakimyan; long live the Armenian people, long live Singapore, long live the New World,” Nikol Pashinyan concluded. He thanked the local authorities for their thoughtfulness of the Armenian heritage. 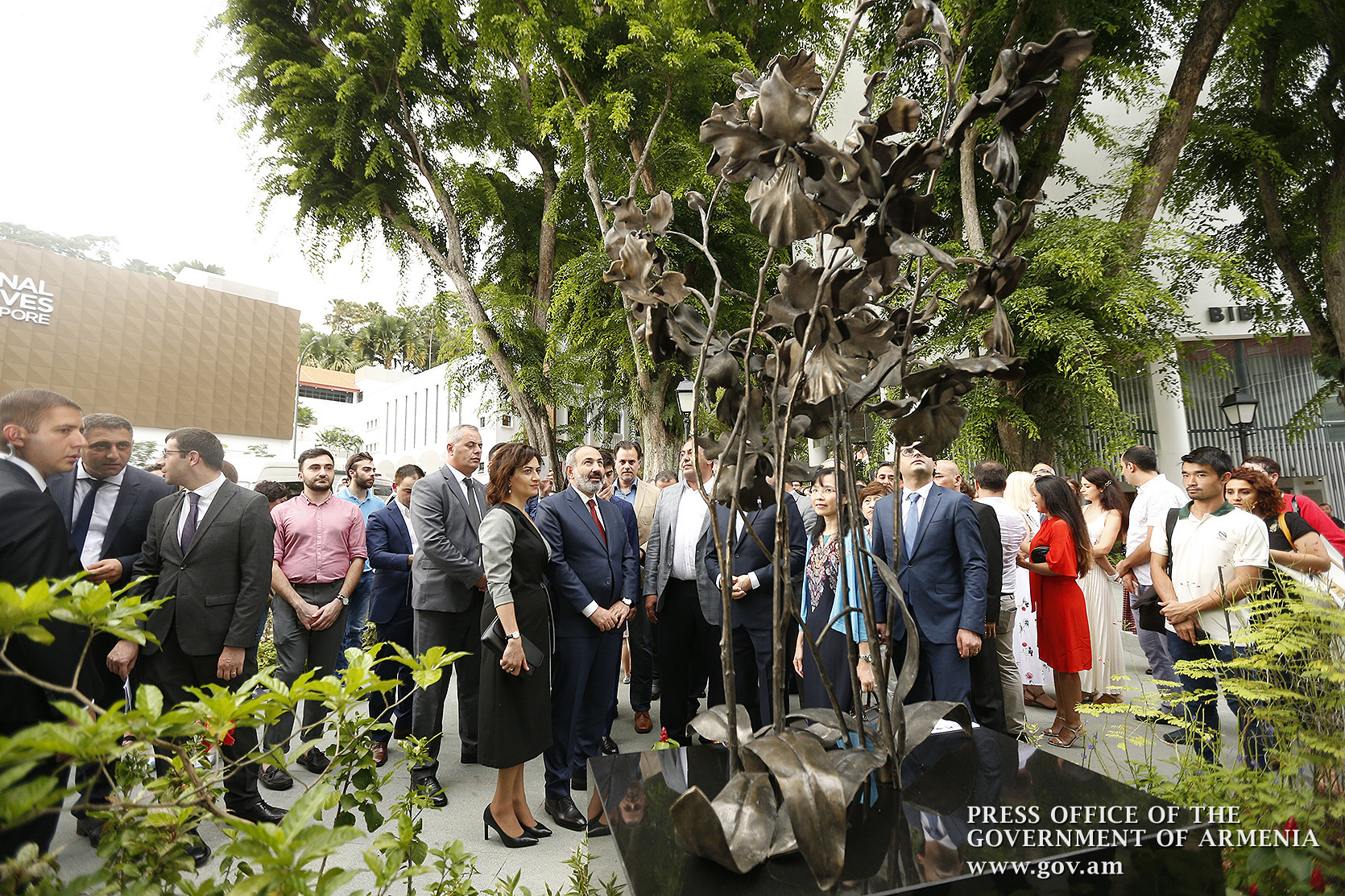 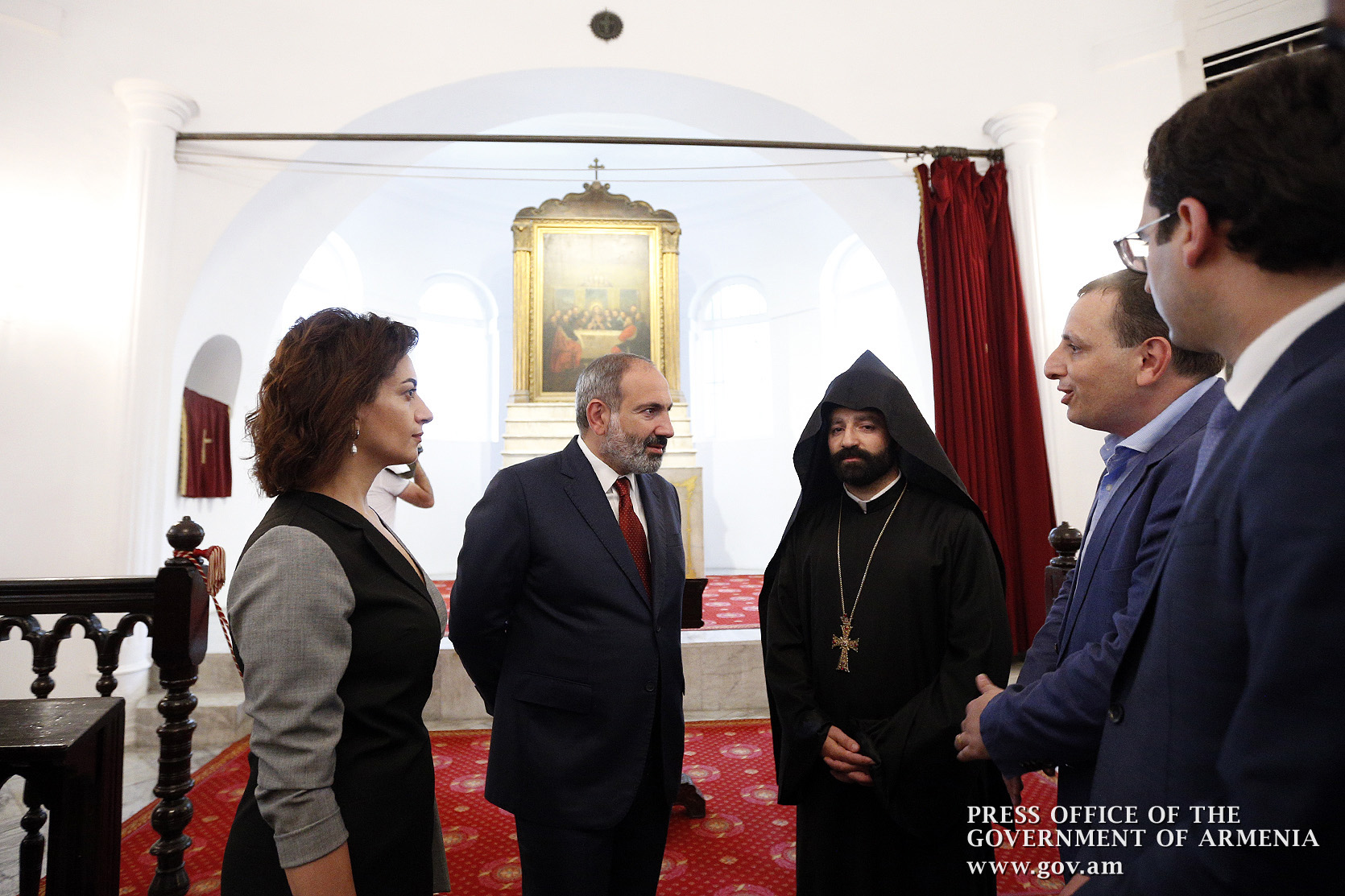 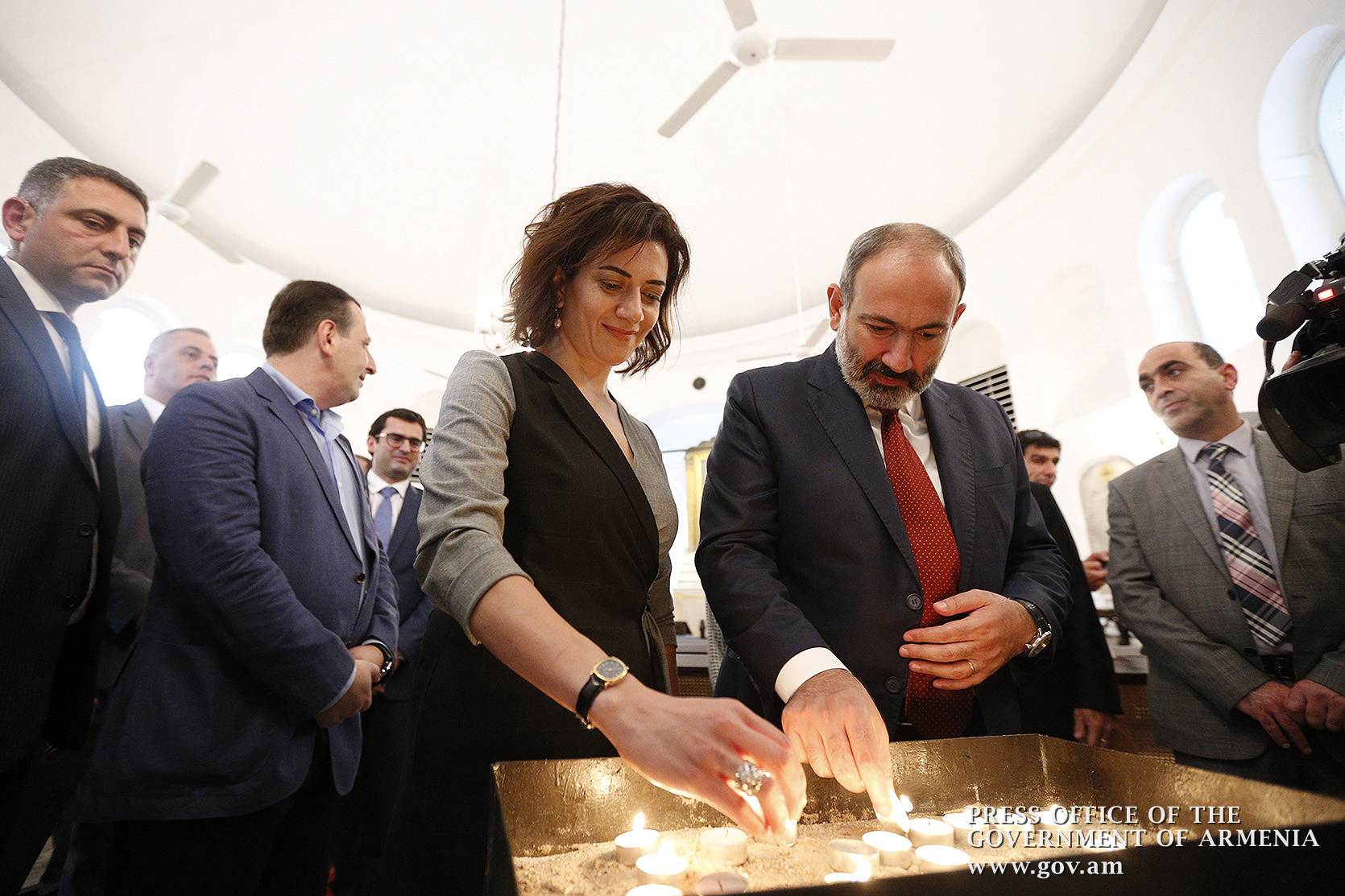 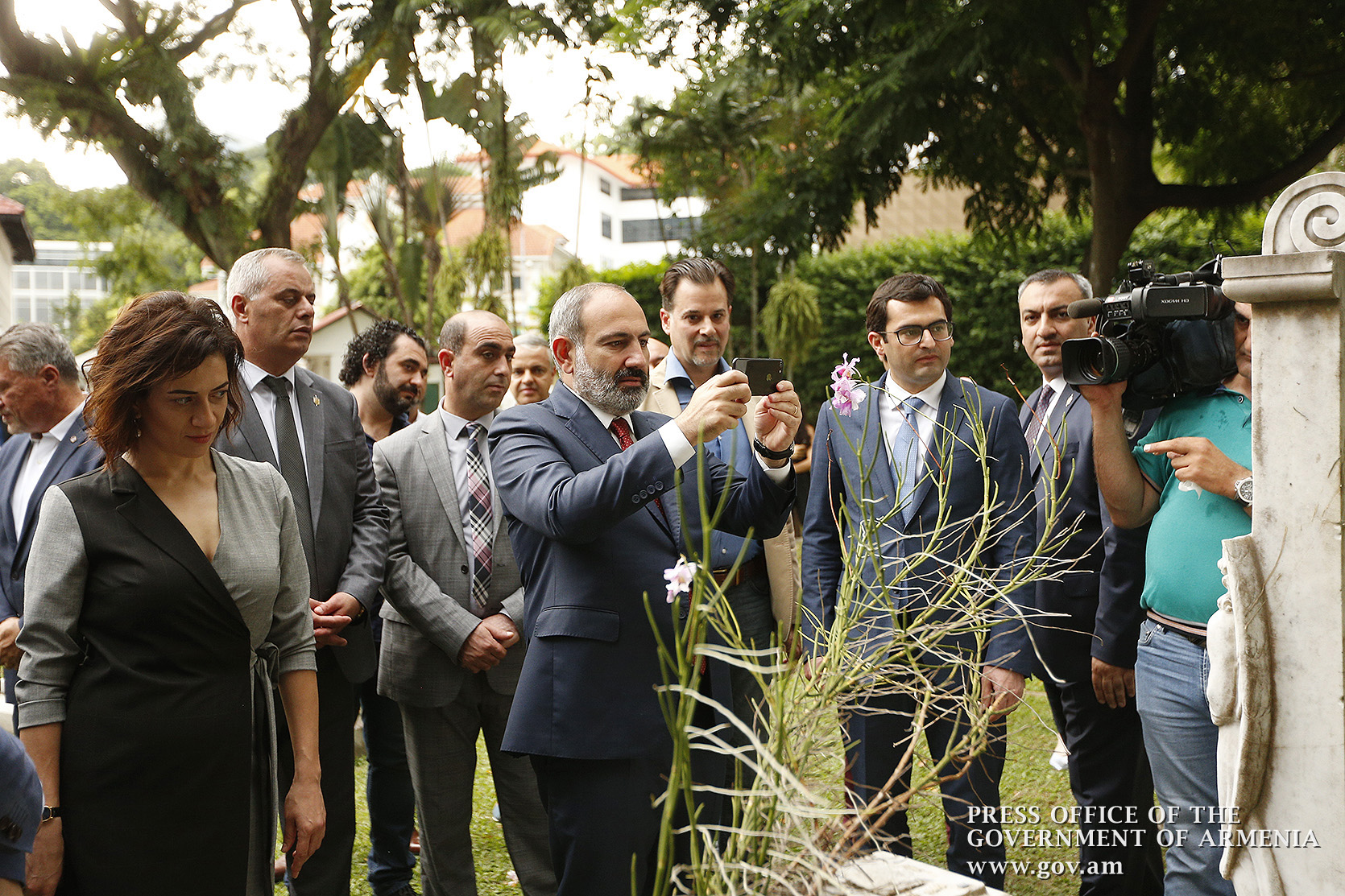 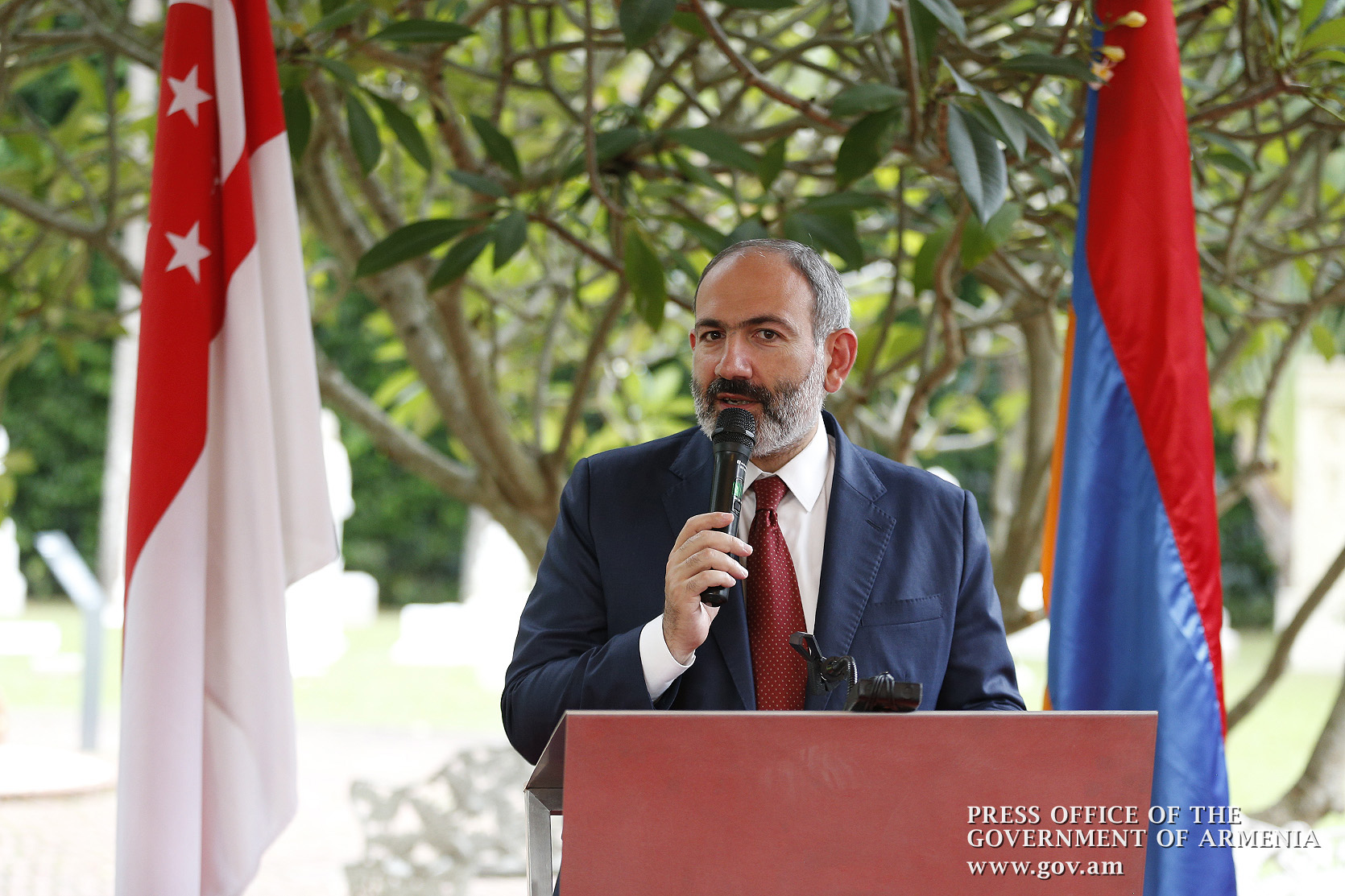 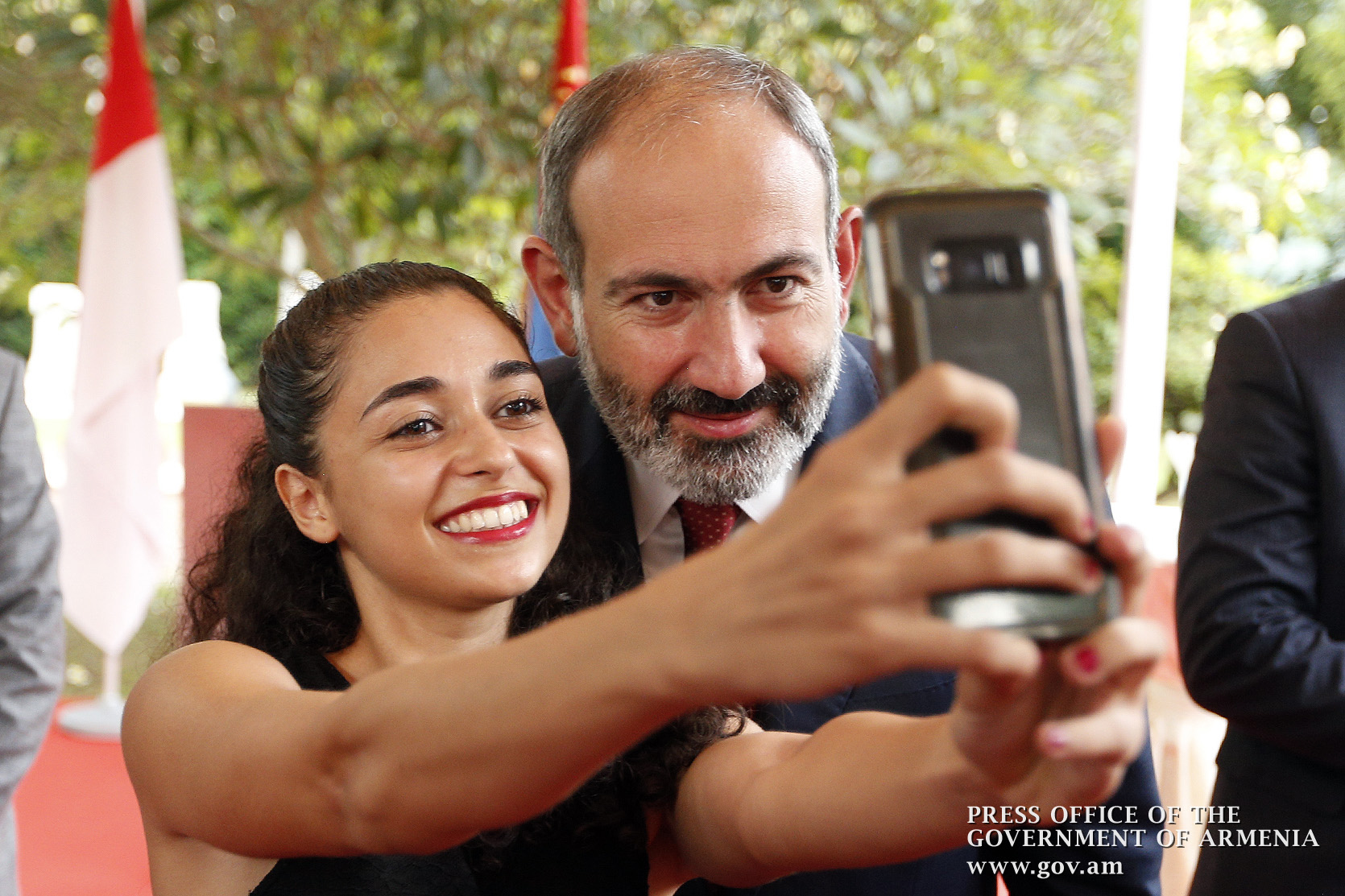 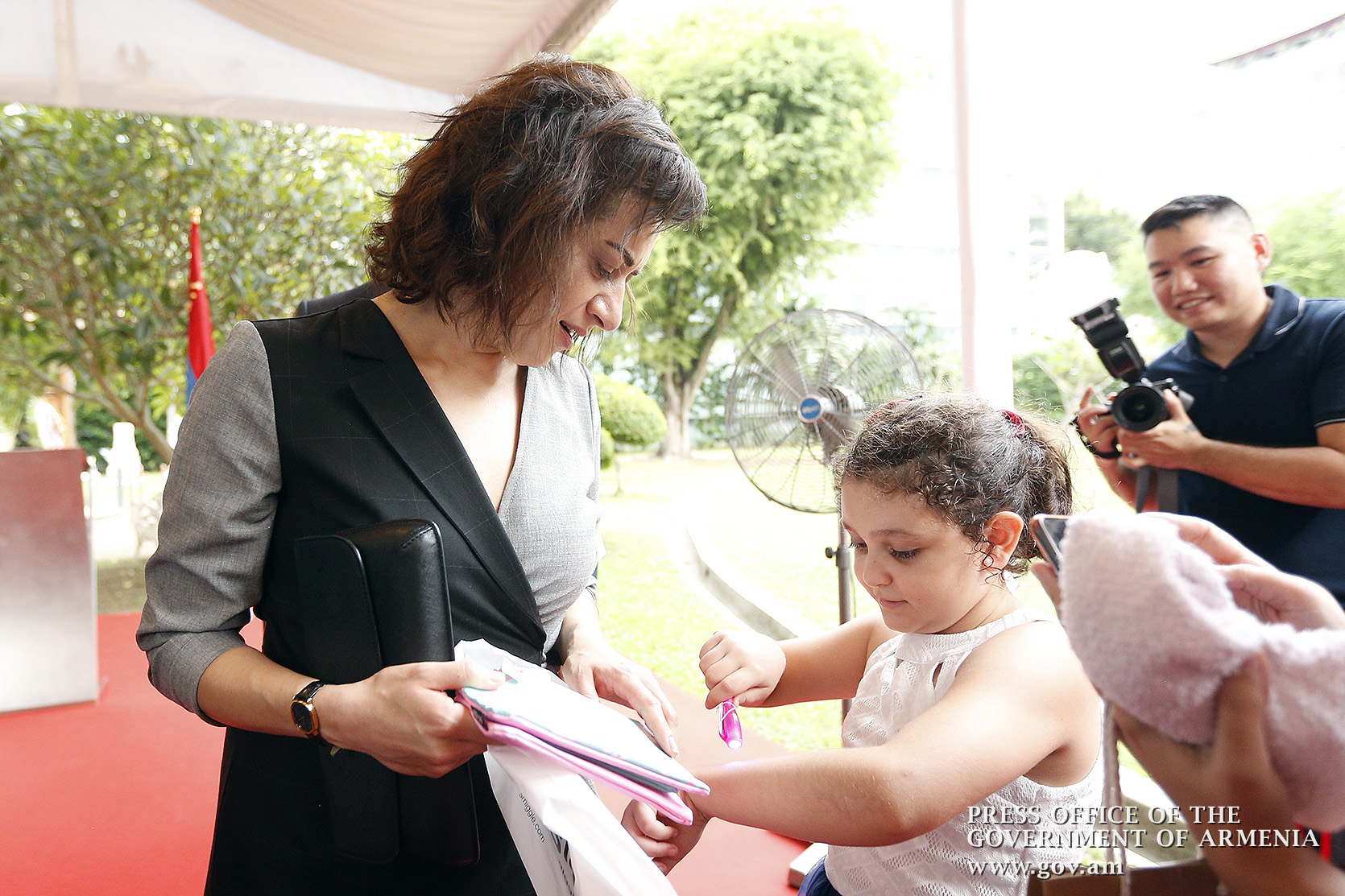 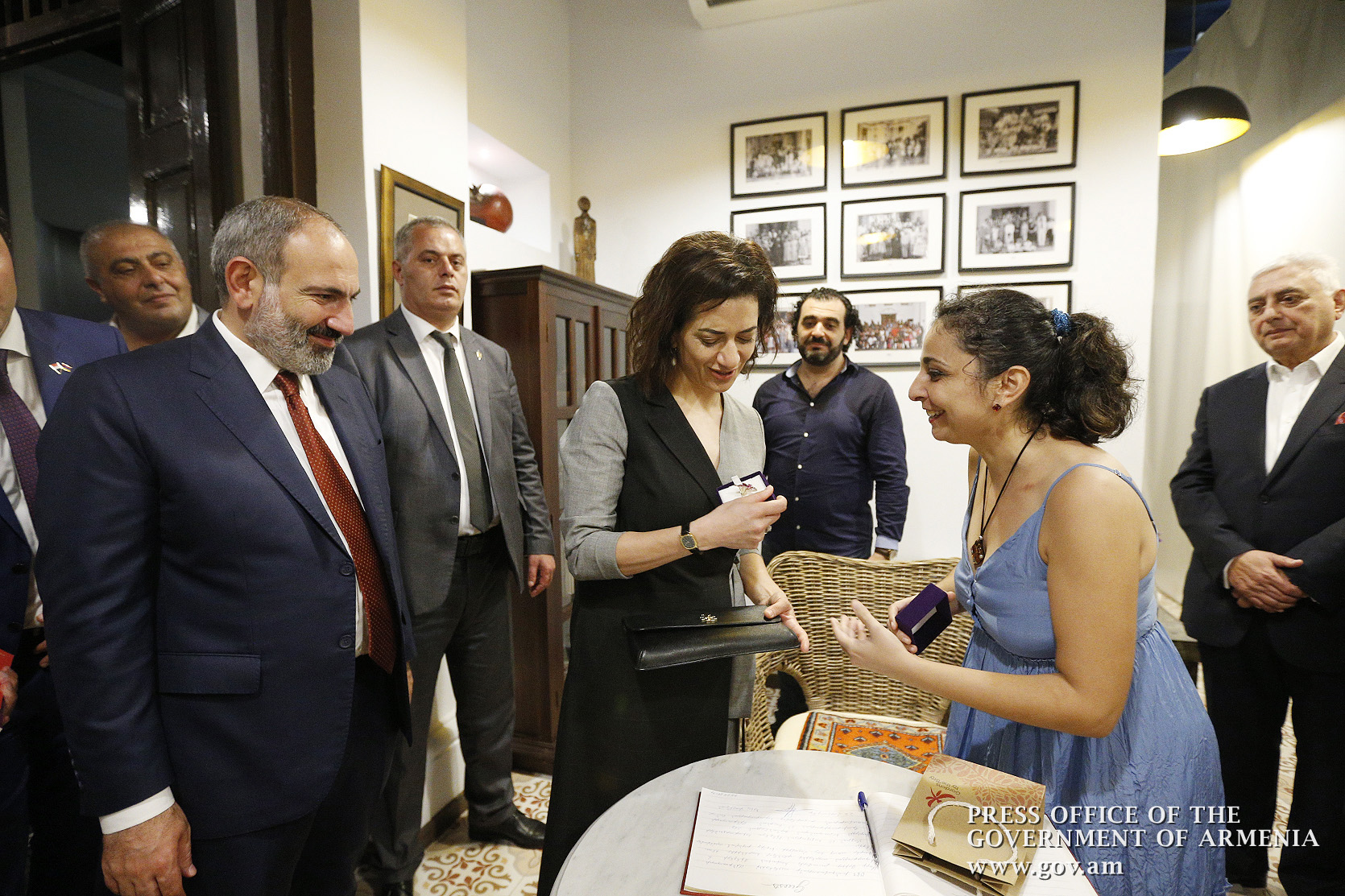 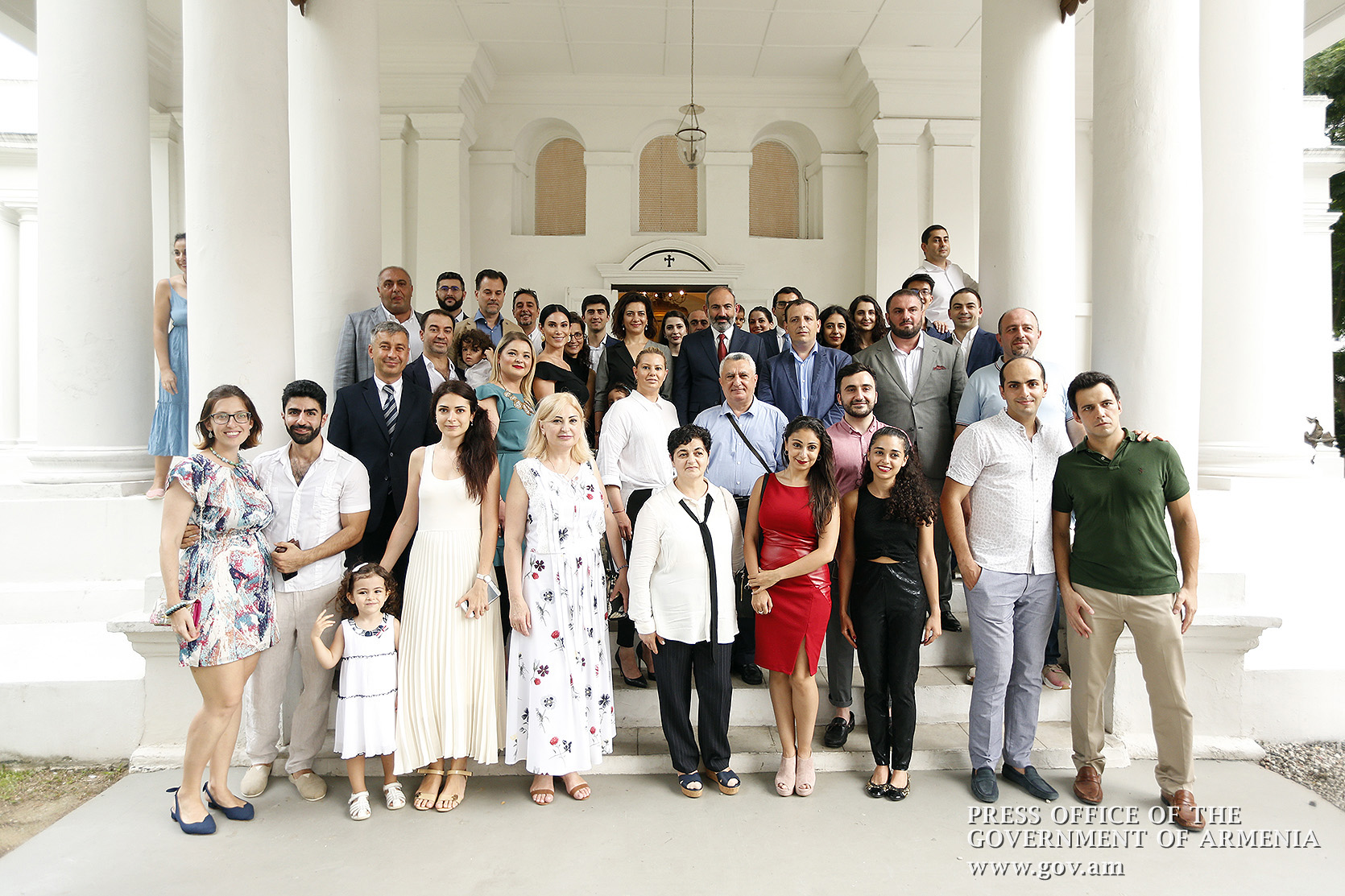 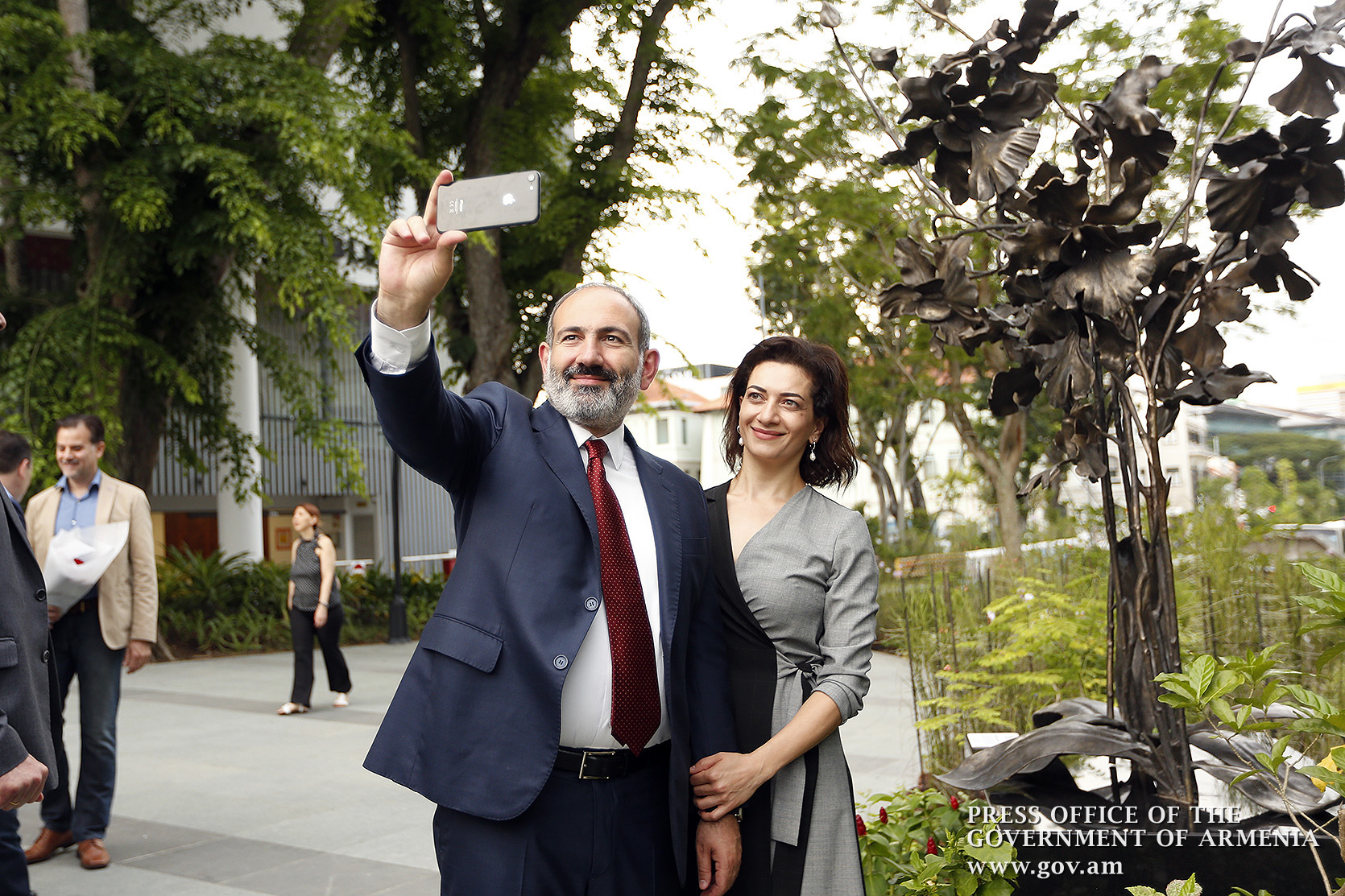