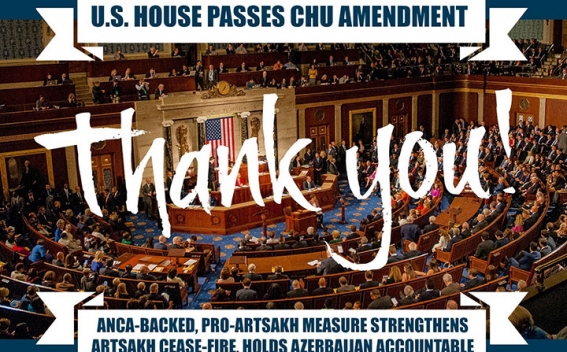 “The campaign of terror against the people of Artsakh must end,” Rep. Chu told the ANCA following House passage of her measure. “That’s why I introduced my amendment to support the cease-fire strengthening proposals originally put forward by House Foreign Affairs Chairman Eliot Engel and his predecessor, Ed Royce. The Royce-Engel proposals include gunfire locators, new observers, and a ban on snipers, heavy arms, and new weaponry along the line-of-contact. Adopting them is necessary for ensuring those who violate the peace are caught and stopped, and that is what my amendment encourages. I am pleased it was adopted in the NDAA and hope to see these proposals implemented,” concluded Rep. Chu.

“We welcome today’s historic U.S. House vote for peace,” said ANCA Chairman Raffi Hamparian. “We want to thank Congresswoman Judy Chu for her relentless advocacy, Chairman McGovern for his thoughtful and principled leadership of the Rules Committee, Representatives Pallone and Schiff for serving as amendment cosponsors, and – of course – each and every one of the legislators who cast common sense votes for a stronger cease-fire and the promise of a durable and democratic peace between Artsakh and Azerbaijan.”

Joining Rep. Chu as cosponsors of her amendment were Congressional Armenian Caucus Co-Chair Frank Pallone (D-NJ) and Vice-Chair Adam Schiff (D-CA). The amendment, #97, was adopted by the full House by a voice vote on Wednesday evening, as part of an “en bloc” series of amendments. ANCA summer fellows were on Capitol Hill throughout the day advocating in support of passage of the measure. Photos from their meetings are available on the ANCA Facebook page here: