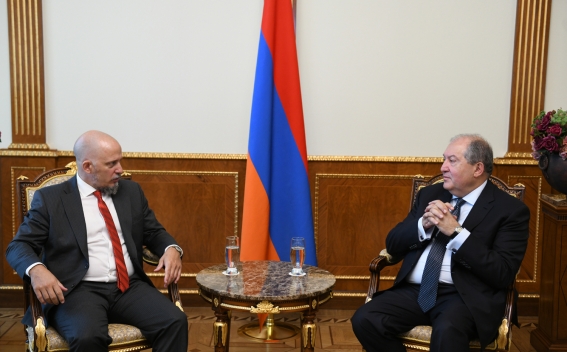 President Armen Sarkissian held today a farewell meeting with the Ambassador Extraordinary and Plenipotentiary of the Republic of Argentine to Armenia Gonzalo Urriolabeitia who is concluding his diplomatic mission in our country.

President Sarkissian thanked the Argentinean Ambassador for his efforts aimed at the deepening and strengthening of cooperation between Armenia and Argentine.

Stressing the importance of a continued development of the relations between the two countries and full utilization of the opportunities existing in different areas for a mutually beneficial cooperation, the interlocutors noted the Armenian community of Argentine has been contributing to it constantly and significantly.

Ambassador Urriolabeitia noted that he was leaving Armenia with warm memories and would remain our country’s good friend.