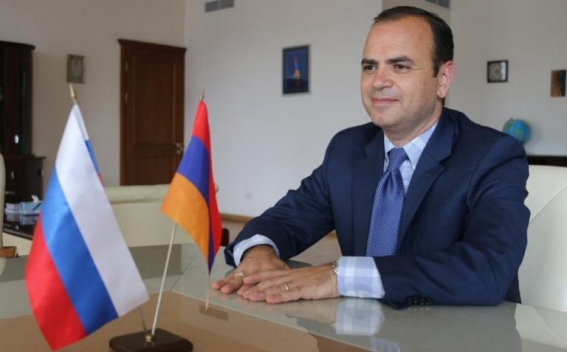 Chief Commissioner for Diaspora Affairs of Armenia Zareh Sinanyan met on July 22 with State Secretary and Deputy Foreign Minister Grigory Karasin during his working visit to Russia. Ambassador of Armenia to Russia Vardan Toghanyan was present at the meeting.

As ARMENPRESS was informed from the Office of the Chief Commissioner for Diaspora Affairs of Armenia, at the beginning of the meeting Grigory Karasin noted that Russia is a multi-national country, various nations live there and co-exist with solidarity, which is very important for Russia. Karasin said that Armenians are part of the multi-national Russia and are very active in political, cultural and social spheres.

Zareh Sinanyan emphasized in his speech that the Russian-Armenian community has great potential and the Armenian side will be glad if Armenians, who are already fully integrated in the Russian public, are able to participate in the development of Russia and at the same time preserve their national identity.

The Chief Commissioner for Diaspora Affairs of Armenia presented to the Russian Deputy FM the main goals and functions of his office and the main directions of collaboration with the Diaspora, including the Russian-Armenian Diaspora.  Sinanyan noted that he had numerous meetings in Russian and will visit Russia often, conditioned by the size of the Armenian community in that country.