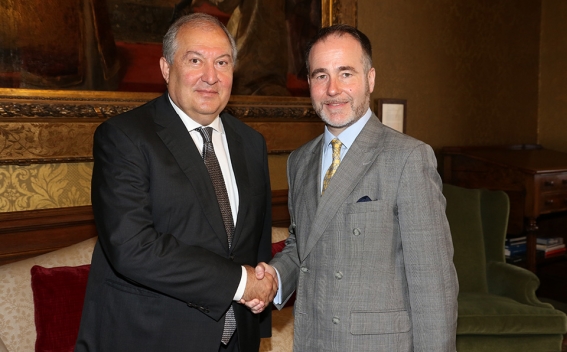 President Armen Sarkissian, who is in the United Kingdom on unofficial visit, met today with the newly appointed Minister of State for Europe and the Americas Christopher Pincher.

President Armen Sarkissian congratulated Mr. Pincher on assuming the position of the Minister of State and expressed confidence that during his tenure in office cooperation between Armenia and Great Britain would deepen and strengthen.

Christopher Pincher in his turn noted with satisfaction that President Sarkissian is the first foreign leader whom he met with after assuming his post. He underscored that Armenia is a valuable and important partner for his country. The interlocutors in an informal setting discussed issues pertinent to the Armenia-UK bilateral agenda and regional developments.