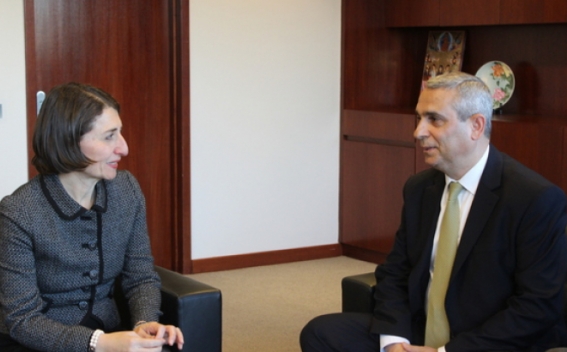 On August 1, within the framework of the working visit to Australia, the delegation headed by Minister of Foreign Affairs of the Republic of Artsakh (Nagorno Karabakh Republic) Masis Mayilian met in Sydney with Prime Minister of the Australian State of New South Wales Gladys Berejiklian.

During the meeting, the sides exchanged views on the development of cooperation and strengthening the ties between Artsakh and the State of New South Wales, taking into account that the Parliament of New South Wales recognized the Republic of Artsakh in 2012.

The sides also touched upon issues related to the increase of the role of the Armenian Diaspora in promoting the foreign policy agenda of Artsakh. In this context, Masis Mayilian presented the priorities of Artsakh's foreign policy and the challenges in this sphere.

In turn, Gladys Berejiklian briefed on her recent visit to Armenia and the meetings she had there.

Speaker of the New South Wales Legislative Assembly Jonathan O'Dea and President of the Legislative Council John Ajaka, as well as Member of the National Assembly of Artsakh David Ishkhanyan, Permanent Representative of the Republic of Artsakh to Australia Kaylar Michaelyan and Executive Director of the Armenian National Committee (Hay Dat) of Australia Hayk Kayserian also participated in the meeting.