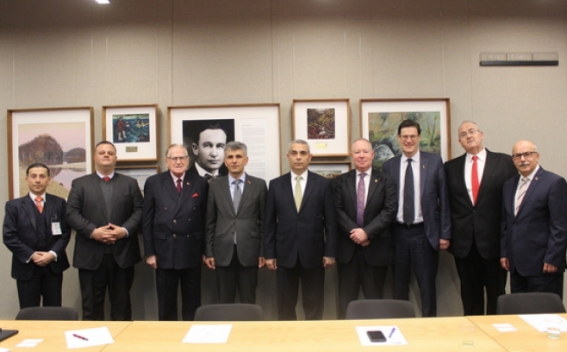 On August 1, within the framework of the working visit to Australia, the delegation headed by Foreign Minister of the Republic of Artsakh Masis Mayilian met in Sydney with members of the Group of Friendship with Armenia chaired by Speaker of the New South Wales Legislative Assembly Jonathan O'Dea. The meeting took place in the New South Wales Parliament.

Masis Mayilian presented the processes of international recognition of Artsakh and establishment of decentralized cooperation, noting the importance of the resolution recognizing the Republic of Artsakh, which was adopted by the New South Wales Parliament in 2012. The Foreign Minister underlined that such resolutions are a significant contribution to the process of international recognition of Artsakh, which, in turn, promotes the strengthening of the Republic’s security and the establishment of lasting peace in the region.

During the meeting, the sides exchanged views on the prospects of establishment of practical cooperation in different areas, based on the commitment to the universal values of freedom, democracy, the rule of law and respect for human rights. In this context, the Foreign Minister of Artsakh touched upon the process of development of democracy and civil society in the Republic.

At the request of the participants of the meeting, Masis Mayilian also briefed them on the current stage of the peaceful settlement process of the Azerbaijan-Karabakh conflict.

During the meeting, the sides noted the importance of the establishment of the Circle of Friendship with Artsakh in Australia, expressing confidence that it would play a significant role in the development of relations between Artsakh and Australia.