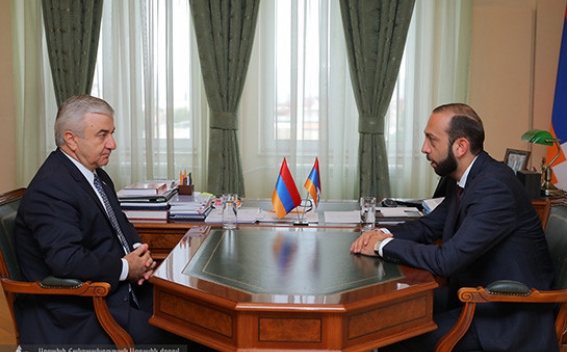 August 6, a meeting – private conversation of the heads of the parliaments of the two Armenian republics - Ashot Ghoulyan and Ararat Mirzoyan took place in the National Assembly of the Republic of Artsakh.

Welcoming the visit of Ararat Mirzoyan to Artsakh within the framework of the 7th Pan-Armenian Summer Games in Artsakh, Ashot Ghoulyan underlined the importance of the idea of holding the event in Stepanakert.

The Head of the Parliament also touched upon the close cooperation established between the Parliaments of Artsakh and Armenia particularly the results of the recent joint sitting of the NA Standing Committees on State and Legal Affairs of the National Assembly of the Republic of Artsakh and the National Assembly of the Republic of Armenia. Ashot Ghoulyan expressed confidence that from September the cooperation of the two parliaments will be  more activated.

Expressing gratitude for the reception, RA National Assembly President Ararat Mirzoyan also touched upon the expansion of parliamentary ties between the two Armenian states and noted that work will also be done to intensify cooperation between other committees. Speaking about the 7th Pan-Armenian Summer Games, Ararat Mirzoyan considered it a symbolic event in Stepanakert in terms of national unity.

During the meeting the sides also touched upon the previous day rally at the Renaissance Square in Stepanakert and other issues on interaction included in the agenda.