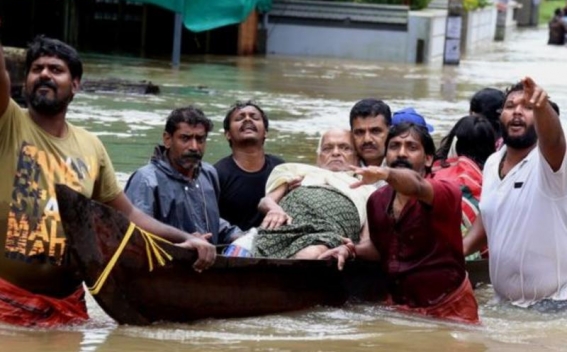 The death toll from floods in the Indian states of Karnataka, Kerala and Maharashtra rose to 147, state authorities said on Sunday, as rescue teams raced to evacuate people and waters submerged parts of a World Heritage Site, scmp reports.

Heavy rain and landslides forced hundreds of thousands of people to take shelter in relief camps, while train services were cancelled in several flood-hit areas.

In nearby Myanmar, troops and emergency responders scrambled to provide aid in flood-hit parts of the country after rising waters forced residents to flee by boat and a landslide killed at least 52 people.

In the southern state of Kerala, at least 57 people were killed in rain-related incidents while over 165,000 people were in relief camps in the state, state authorities said on Sunday.

Authorities worried that rescue operations would be hit by thunderstorms and rainfall predicted in some parts of Kerala.

Last year, more than 200 people were killed in Kerala and over five million affected in one of worst floods in 100 years in the state.

While Karnataka, Kerala and Maharashtra have been the worst hit this year, several other states including Gujarat, Assam and Bihar have also seen heavy damage due to floods.

In Maharashtra, where the death toll stood at 30, the flood situation was improving, according to state-run All India Radio, though authorities said it would be difficult to restore rail services in some flood-hit areas within the next two weeks.

Citing media reports, the Congress party said so far this year 446 people have been killed in six flood-hit states including Assam, Bihar and Gujarat.

“Despite the mammoth loss of lives and displacement caused due to floods, the government is failing to realise the gravity of the flood fury,” the Congress party said in a statement on Sunday.

In Myanmar, hundreds of soldiers, firefighters and local rescuers were still pulling bodies and vehicles out of the muddy wreckage of Paung township on Sunday.

“The latest death toll we have from the landslide in Mon state was 52,” Brigadier General Zaw Min Tun told Agence France-Presse.

As the rainy season reaches its peak, the country’s armed forces are pitching in and have readied helicopters to deliver supplies.

“Access to affected regions is still good. Our ground forces can reach the areas so far,” Zaw Min Tun said.

Heavy rains pounded other parts of Mon, Karen and Kachin states, flooding roads and destroying bridges that crumbled under the weight of the downpour.