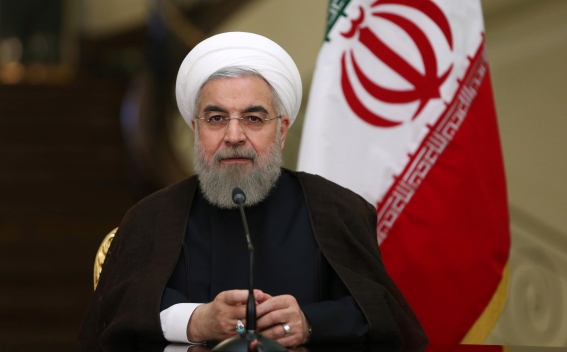 “The Islamic Republic of Iran welcomes friendly solutions ... there have been contacts between President Macron and President Rouhani and also exchange of diplomats. There is a possibility of Mr. Rouhani’s visit to France and we will announce if it is finalized,” Mousavi said on Monday in his weekly presser, mehrnews reports.

“Iran always leaves the door open for negotiation and seeks to expand bilateral and regional cooperation to deescalate tensions; we want peace,” he highlighted.

He also said that FM Zarif will embark on an Asian tour next week in continuation of the country’s active diplomacy.

The remarks came as a report by Al-Monitor on August 6 cites anonymous sources as saying that President Rouhani has declined French President Macron’s invitation to attend G-7 summit on August 24 in France and maybe to have a meeting with President Trump on the sidelines.

Tehran stresses that if Washington is serious about talks, it should first remove all the sanctions and return to the JCPOA.

After the US’ withdrawal from the Iran nuclear deal in May 2018, the European signatories to the deal said they were still trying to keep the accord alive by launching the long-awaited INSTEX to help Iran reap some benefits from the deal. Iran says as long as the mechanism does not cover its oil revenues, INSTEX is of no use to the country.

Meanwhile, in response to US withdrawal the EU’s inaction, Iran has introduced two phases of its measures to reduce its JCPOA commitments. Tehran's moves come after its "strategic patience" wore thin after a year of waiting for the European nations to normalize trade ties with Iran.

Last week, Spokesman Mousavi pointed to numerous phone conversations between Iranian and French presidents, saying, “up to now, there are no suggestions that can be undeniably counted on.”

Elsewhere he touched upon the talks going on between different factions in Afghanistan and added that Iran is not going to talk with the US on developments in Afghanistan.