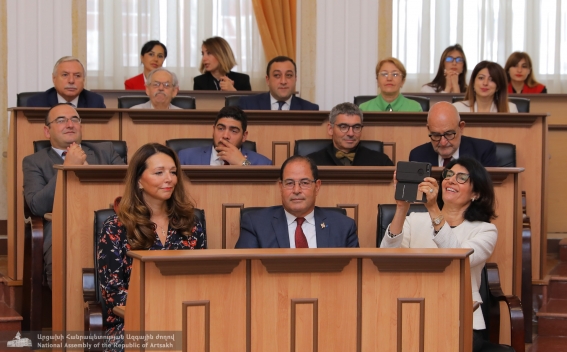 Opening the meeting, President of the Artsakh Republic National Assembly, "Artsakh-France" friendship circle Chairman Ashot Ghoulyan highly appreciated the work done by the friends of Artsakh in France, in disseminating information about Artsakh and voicing the rights of the people of Artsakh.

"I can say with confidence that the French direction is the most active in the foreign relations of the Artsakh Parliament, and the friendship circles the most established institutional structure. And we have all the prerequisites for pushing forward the common agenda, expanding the scope of cooperation, involving both broader political and public groups, "the Head of the Parliament emphasized.

Expressing gratitude for the reception, member of the National Assembly of France, President of the France-Artsakh Friendship Circle Guy Teissier, noted that it was a great honor for him to open a sign of friendship between the settlements of Artsakh and France in the park of freedom fighters devoted to their homeland. Underlining the similarity between France and Artsakh in sharing universal and democratic values, the president of the France-Artsakh friendship circle spoke of ways to make Artsakh recognizable abroad and noted that they would do everything in their power to achieve this goal.

The French MP, the founder-member of the «France-Artsakh" friendships circle Valerie Boyer, referring to the visit of the delegation, said that they will spread everywhere what they have seen in Artsakh.

“We must tell about the conflict that is being forgotten by the world. You are an example of struggle, resistance, democracy in this difficult part of the world,” the parliamentarian emphasized.

In his speech French MP Daniel Kazaryan also pointed out the democratic direction adopted by Artsakh. He particularly said:

"I congratulate you on the democratic viability that exists in this country. This shows your intention to create a sustainable future. "

The speeches of other French parliamentarians also included proposals for the protection of the fundamental rights of the people of Artsakh, cooperation in the humanitarian fields between Artsakh and France.

In the morning the delegation visited Stepanakert Memorial Complex and laid a wreath at the memorial to the victims of the Armenian Genocide, pay tribute to the French Member of the European Parliament, Henry Saby, a friend of the Armenian people. The delegation then laid flowers at the tombs of soldiers killed for the liberation of Artsakh. The delegation then laid flowers at the tombstones of soldiers perished in the liberation of Artsakh.