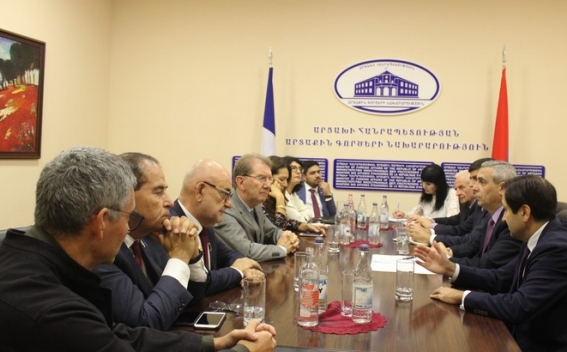 On September 11, Foreign Minister of Artsakh Masis Mayilian received the delegation of Members of the National Assembly and Senate of France headed by Chairman of the France-Artsakh Friendship Circle Guy Teissier.

The Foreign Minister welcomed the French MPs and noted the importance of their visit in view of getting acquainted with the current situation in Artsakh and developing friendly relations between the two peoples.

Masis Mayilian touched upon the state-building process and the democratic developments taking place in Artsakh, in particular, the recent elections to the local self-government bodies. The Foreign Minister stressed that they are yet another manifestation of the process of organization of the public life in Artsakh, based on democratic values.

During the meeting, the sides touched upon the achievements in the bilateral relations, as well as the challenges and the opportunities of addressing them. They stressed the need for the development of the international relations of Artsakh and the importance of unimpeded realization of the fundamental rights and freedoms by its citizens.

Masis Mayilian emphasized the need to multiply the efforts towards the development of the parliamentary diplomacy and decentralized cooperation between the two countries. In this context, the Foreign Minister stressed the key role of the France-Artsakh Friendship Circle.