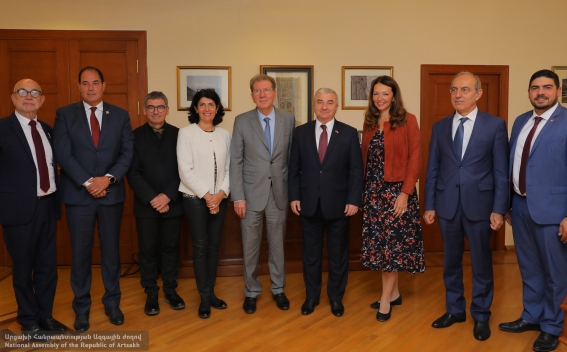 September 11, President of the National Assembly Ashot Ghoulyan received the French parliamentarians who are in Artsakh on a three-day working visit.

Welcoming the guests and speaking about the meeting in the parliament in an extended format, President of the National Assembly noted that such meetings provide an opportunity to update agendas and work on new cooperation programs. Ashot Ghoulyan also expressed gratitude to the friendly people of France for the attention towards Artsakh.

On behalf of the delegation thanking the NA President, member of the National Assembly of France, Chairman of France-Artsakh friendship circle expressed his readiness to exert every effort to make Artsakh recognizable to the world and to highlight the key activities that will make recognition and development of Artsakh irreversible.

A wide range of issues related to parliamentary diplomacy, prospects for cooperation, in particular, cooperation in the fields of agriculture, science and tourism were also discussed during the meeting.