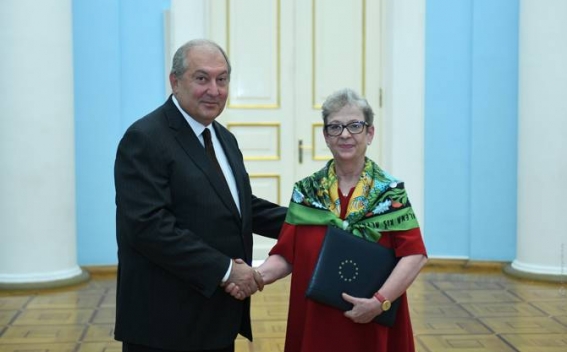 The Ambassador noted that she was greatly honored to be back to Yerevan to serve as the EU Ambassador. Andrea Victorine was Germany’s Ambassador to Armenia in 2007-2009.

In her remarks Andrea Victorine said that the EU is ready to assist Armenia in the process of reformation. “We are very glad that there is the agreement, foundation and roadmap: it provides the opportunity to work on all this faster,” she said. The Ambassador noted that she has multiple ideas which she intends to implement during her tenure.

The parties exchanged views on the agenda of the Armenia-EU cooperation. President Armen Sarkissian stressed the importance of a comprehensive and enhanced cooperation with the EU and its member states.