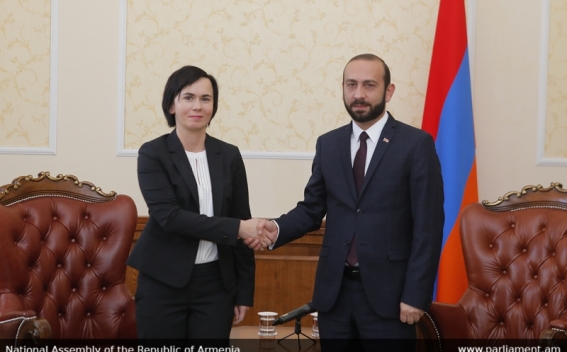 On September 27, the President of the RA National Assembly Ararat Mirzoyan received the Ambassador Extraordinary and Plenipotentiary of the Republic of Lithuania to Armenia Inga Stanytė-Toločkienė.

Congratulating the Ambassador on the occasion of her appointment, Ararat Mirzoyan has highly assessed the level of the relations between the two countries, and its vivid example is the visit of the Speaker of the Lithuanian Parliament expected to Armenia. The President expressed satisfaction over the effective work of the Friendship Groups of the two parliaments.

Ararat Mirzoyan thanked the Ambassador for the ratification of the RA-EU Comprehensive and Enhanced Partnership, as well as her country's permanent support in the Armenian Genocide recognition process.

Stanytė-Toločkienė has noted with satisfaction that her tenure coincided with similar historical period for Armenia and has underlined that the friendly ties traditionally formed between Armenia and Lithuania create special environment for the political dialogue.

According to the Ambassador, in Lithuania they follow with interest the changes in Armenia and the reforms being made in the justice sphere.

She expressed her readiness for supporting that agenda, as well as sharing experience in the spheres of restoring energy, plastic recycling and other spheres.

The parties expressed their agreement to activate the inter-parliamentary relations at the level of Friendship Groups, as well as the Committees on Euro-Integration.