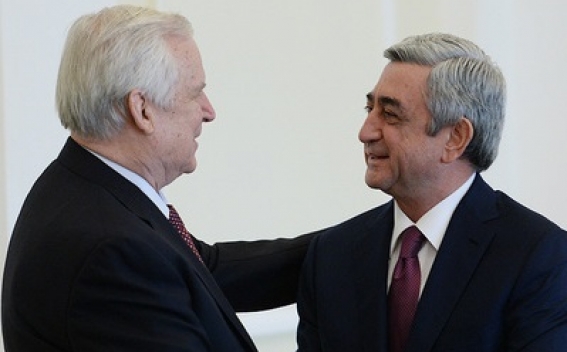 Third President of the Republic of Armenia Serzh Sargsyan has conveyed birthday greetings to National Hero of Armenia, Member of the Council of the Federation of the Federal Assembly of the Russian Federation, Nikolai Ryzhkov on his 90th birth anniversary. The congratulatory message reads:
“Dear Nikolai Ivanovich,
I cordially congratulate you and extend my sincere wishes on your remarkable jubilee.
You have served your state and nation honestly and unconditionally for many decades, and as you mentioned on one occasion, you did so abiding by your conscience and principles. As a wise statesman, politician, and a highly qualified individual, you did everything in you power to strengthen the centuries-old friendship between the Armenian and Russian peoples, to develop and deepen the mutually beneficial Armenian-Russian interstate relations.
You have always been very attentive and warm to Armenia and the Armenian people who gave due appreciation to your dedication and efforts by granting you the highest title of Armenia’s National Hero.
During the meetings held on various occasions, I used to tell you that you were considered and loved in Armenia as a faithful friend who had been with us in the most difficult times for our people, accepting our sorrows and problems as your own. The Armenian people will always remember and appreciate your selfless activity in the wake of the terrible earthquake of December, 1988.
These qualities of a skilled and thoughtful statesman and a devoted friend have deservedly earned you great respect and prestige in your own country and beyond. And today, on your 90th birthday, you are worthy of thousands of people’s love and respect, even though in your life full of challenges and achievements you happened to come across with such people who did not understand you, but which did not prevent you from acting and moving forward in accordance with you conscience and principles.
Is there anything more important than stating with satisfaction after nine decades of life that you can walk down the streets calmly and look straight into people’s eyes?
Reiterating my congratulations, I wish robust health, infinite happiness and wellbeing to you and your family, as well as fortitude and prosperity in the coming years of your life.”
Հայերեն На русском